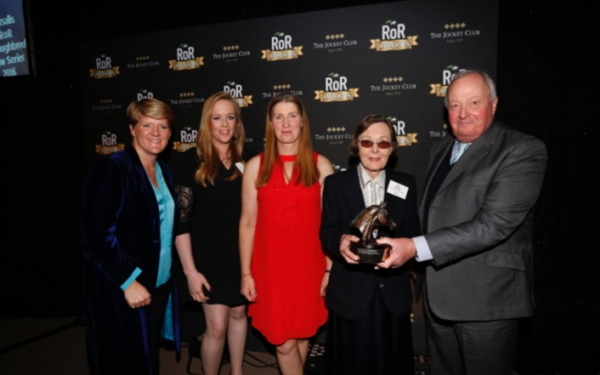 Night of celebration as ex-racehorses honoured by RoR

Retraining of Racehorses (RoR) is not only British racing’s official charity, supporting the welfare of ex-racehorses but stands as a model of collaboration and duty across the sport.

Around 7,000 racehorses leave training in the UK each year, and through the efforts of the RoR and a nationwide network of supporters, there have never been so many avenues open to them to live out meaningful and active lives.

The charity works with around 15 retraining centres, while focusing on expanding their challenging and varied series of events and clinics for these ex-racers. The RoR’s contribution and reputation are firmly embedded in British racing and its success has also inspired similar work internationally – transforming the lives of horses and those devoted to them. As Di Arbuthnot commented: “We have to be careful that having led the way in retraining racehorses that we now don’t get left behind other parts of the world.”

The RoR Awards at Newmarket on December 11th celebrated just a small number of these horses that have been found successful second careers, so many of which failed to scratch the surface of their potential as racehorses. Supported by The Jockey Club and held within the beautiful Jockey Club Rooms, the fourth RoR Awards recognised and honoured its champions of 2017. Introducing the night’s winners was the formidable double act of RoR patron Clare Balding and ITV’s Luke Harvey, who himself remains very much a hands-on horseman.

From Dressage to Polo; through Eventing, Showjumping, Endurance and Showing, the stand-out performers of the year were acknowledged. The personal stories of many of the owners and riders brought home the versatility and potential of these horses that were born firstly to race. The top accolade of the evening was claimed by Beware Chalkpit. The RoR Horse of the Year, and the most worthy winner is owned by Ann Leftley and ridden and adored by Rebecca Court.

Congratulations to all the nominees and winners, and for the inspiring work of this vital and much cherished charity.