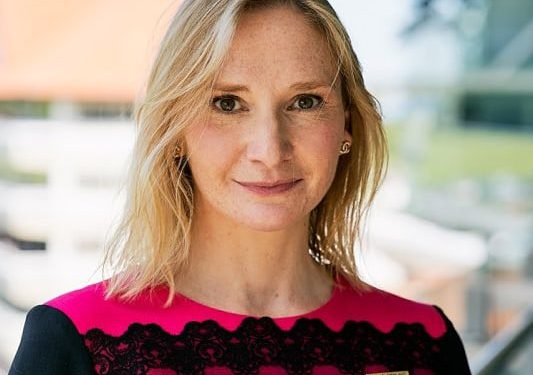 A year on from riding in the dazzling and indelible Magnolia Cup, Rachael Gowland of the British EBF, on community – personally and professionally.

When it comes to community, my philosophy is that you can start wherever you like, be it with friends, within the industry or forging links to take you out into the rest of the world.  It doesn’t matter where you start but as the world gets weirder and technology invariably alienates as much as it connects, the important thing is that you remember to connect and make that connection with empathy.

When I started at the European Breeders’ Fund in 2017, I walked the four highest peaks in England (Scafell, Scafell Pike, Hellvelyn and Skiddaw) in aid of Racing Welfare. The EBF Trustees were kind enough to support me with £400 towards the endeavour and I raised over £3,000 to help people in need in our sport.  As a result of that experience, I am now nearly halfway through a personal challenge of summiting all 214 of the Wainwright Fells.

A year ago, I was reflecting on one of the most extraordinary days of my life.  I had ridden in the Magnolia Cup, an almost fabled charity race at Goodwood’s Glorious meeting and come through in the late stages to finish in third place. In truth now, it seems a world away, almost impossible that it happened, but when I feel frustrated at not being able to enjoy all the things I usually do, the memories of that experience fill me with joy.

It is not just what I achieved personally but because I was part of something spectacular and because I learnt the value of inclusion, teamwork and doing something which ultimately benefits others. The Magnolia Cup was fundraising and training on an entirely different level! Early mornings, jockey coaching sessions, learning to ride out (again) and riding work took their toll and reminded me of the hundreds of members of stable staff that do it as a matter of course, day in, day out.  I rode out with John Berry in Newmarket and being out on the gallops each morning, seeing people and horses going about their business, re-ignited my passion for horseracing.  The charity we rode for, Wellbeing of Women, had never experienced a fundraising effort like it and I understand our group helped raise one of the largest sums from a Magnolia Cup in its history.

What stood out for me the most about the race was that although we all hoped we would win, we all looked after each other, reminding each other how to get a clean start and most importantly we all shouted to each other at the end of the race to remember how to pull up safely so none of us fell off! Maybe that sounds daft but when you think about it, every single person in that race came back into the paddock safe and with a huge smile on their face – because we worked together.

I’ve taken away a wonderful experience and some good pals from the Magnolia Cup.  I’m proud to call winning rider, Khadijah Mellah a friend and have the opportunity to open myself up to a different perspective, not just on horseracing but on life in modern Britain for young people of colour as a result.

Great things happen when you all pull in the same direction.  That is why at the British EBF we support racing’s charitable work through gifting race names and race day experiences to Racing to School, Racing Welfare and the Leger Legends.  One of my first challenges on joining the organisation was to find ways of connecting within the industry to help people understand us better.  We seem to be one of British racing’s best kept secrets, despite being established in 1983 and having enhanced prize money by over £36million during that time!

We are unable to provide direct financial contributions but gifting races to Racing to School gives us a unique opportunity to help in more than just a financial way.  The races give the charity an opportunity to promote themselves to the racing public; it has also afforded me the opportunity to meet some of the groups of young people on their racecourse days. We stand by the side of the parade ring and we choose the Best Turned Out horse together; we talk about the effort it takes to get a horse looking their best and why we reward that; we discuss what to look for and invariably the young people end up choosing the horse I probably would have chosen myself! We also let them do the trophy presentation and get their photo taken with winning connections; it makes for a great and memorable day out.

Under normal circumstances, our small team at the European Breeders’ Fund would also have taken part in the annual Racing Together Community Day and we very much look forward to our next opportunity to get involved.

We were also lucky enough to be able to support David Letts through his MBA at Liverpool University; he worked at the EBF during his time doing the course and our CEO, Kerry Murphy was keen to provide David with a work environment where he could earn money while studying and have the industry access he needed for his final dissertation.  He chose to study sexuality in sport using professional jockeys as his population.  His findings have been praised and much publicised; he has now flown the nest to embark on a PhD looking at diversity in sport and is responsible for bringing together the LBGT+ Awareness and Inclusion for Horseracing E-Learning module.  If you haven’t taken it yet, I would recommend it.

Help out however you feel comfortable  but do help out – whether you benefit one person or a hundred is, in some ways, irrelevant; the person who will learn and grown the most from the experience is you.