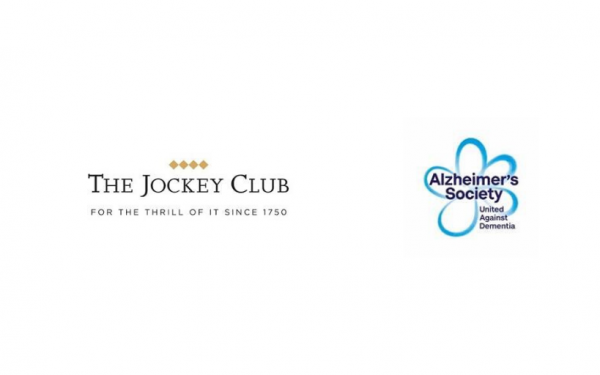 Alzheimer’s Society, the UK’s leading dementia charity, is today announced as the new Official Charity Partner of The Jockey Club.

The two year partnership will help Alzheimer’s Society to raise funds and awareness for the support, care and research it carries out.

Alzheimer’s Society will help raise awareness of its large network of local support services for people with dementia and their carers to Jockey Club colleagues and customers, offering advice and support on all aspects of dementia.

The charity will also work with The Jockey Club to become more dementia friendly, including rolling out the Alzheimer’s Society’s Dementia Friends programme, which is the biggest ever initiative to change people’s perceptions of dementia, across the group. With over three million Dementia Friends already and over 400 dementia friendly communities, the programme is transforming the way the nation thinks, acts and talks about the condition.

Founded in 1750 and with Her Majesty The Queen as its patron, The Jockey Club is the largest commercial group in British horseracing. It is also governed by Royal Charter to act in the best interests of the sport, reinvesting every penny of profit back into British racing.

The Jockey Club’s own charity, Racing Welfare, will also work alongside Alzheimer’s Society during the partnership. Founded in 2000, Racing Welfare is the only charity working across the entire horseracing industry in the UK and offers advice, guidance, support and even housing to racing’s workforce and volunteers in every aspect of their lives.

The decision to work with Alzheimer’s Society for the next two years was made after The Jockey Club’s employees were surveyed for recommendations, with a number of nationwide and regional charities then invited to discuss the opportunity to become the Group-wide charity partner.

It also follows successful three year affiliations with both Rainbow Trust and Carers Trust, whose terms as Official Charity Partners of The Jockey Club came to an end this summer.

Paul Fisher, Chief Executive of Jockey Club Racecourses and Chairman of The Jockey Club’s Charity Committee, said: “We’re delighted to be welcoming Alzheimer’s Society into The Jockey Club family and really excited about how we can work together over the next two years.

“It was quickly apparent that Alzheimer’s Society would be an outstanding charity partner for us. The charity works tirelessly to improve research into dementia and the people affected by it while also enabling people living with the condition to stay connected.

“We can help those people in our local areas by making them feel welcome at our racecourses. Because there are Alzheimer’s Society local support services close to each of our 15 courses we can liaise directly on a local level, as well as lasting education for employees and customers beyond the partnership period.

“What was particularly striking to learn was that while 52% of the UK’s population will be affected by Alzheimer’s in their lifetime, for every £1 currently spent on research into dementia, £7 is spent on cancer research. We’re especially keen to help them raise not only funds but also awareness wherever and whenever we can.”

Sinéad Donoghue, Head of Corporate Partnerships, Alzheimer’s Society, said: “Alzheimer’s Society is delighted to be uniting against dementia with The Jockey Club. Nearly one million people are living with dementia in the UK, and someone develops the condition every three minutes.

“With this new partnership, we will be able to raise vital funds for critical research and support services, making that all important difference to people affected by dementia. Dementia can cause many changes, but people still love to engage with the same hobbies. We will be supporting The Jockey Club to become more dementia friendly across its sites, ensuring that people affected by the condition can continue to enjoy the sport they love.”

The Jockey Club will also continue to work with the Barrie Wells Trust as an official partner, gifting hospitality suites at its racecourses to the Box4Kids initiative, which gives seriously ill children, their families and carers the opportunity to enjoy racedays from the comfort of executive boxes.