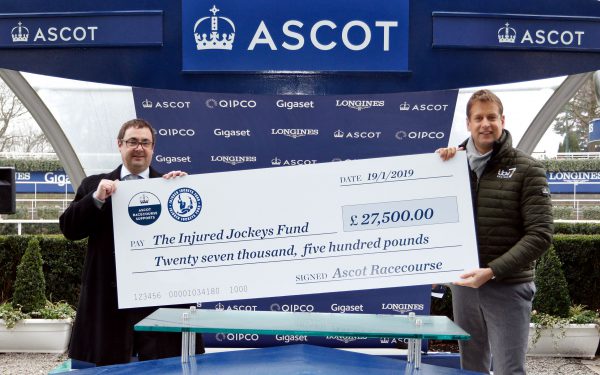 Ambassadors, swear jars and space hopper racing – how the Injured Jockeys Fund is being supported by racecourses

As part of “Ascot Racecourse Supports”, the track’s charitable and community programme, the “Ascot Ambassador Programme” was introduced in 2017.

The programme ensures that a £1 is donated to the Injured Jockeys Fund (IJF) equivalent to each fine dining customer. This is added to the money raised through guest donations.

To date, over £45,000 has been raised to help the rehabilitation and care of many jockeys and their beneficiaries. These funds have also gone towards equipping the Rehabilitation and Fitness Centres in Oaksey House and Jack Berry House, including aqua rehabilitation equipment for the hydrotherapy pools and gym equipment. This new equipment is vital for fitness assessments, injury prevention and treatment of all jockeys.

Ed Chamberlin, IJF Trustee and ITV Racing presenter, recently accepted a cheque from Ascot Racecourse in the Parade Ring in respect of the money raised during 2018.

Ascot is not the only racecourse finding clever ways to support the Injured Jockeys Fund. Lingfield Park donated following jockey canteen host Tina’s swear jar penalties for foul-mouthed members of the weighing room (pictured below). It’s not know what period of time it took for this sum to rise!

On 13th February Plumpton will host their IJF charity raceday, which is famous for its space hopper race, known as the ‘Grand Hop Gold Cup’. Last year’s video of the event was a twitter sensation and the race was won by a clear distance by Tom Scudamore.

The IJF provides support to jockeys past and present who are injured, unable to ride or in need of help. Since being founded in 1964, the charity has helped over 1,000 jockeys and their families and has paid out more than £17 million in charitable assistance. Visit their website to find out more.