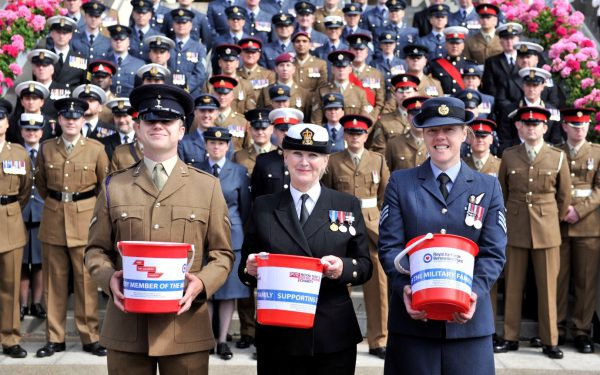 A tri-forces bucket collection was held on the day that raised an amazing £22,220. The ABF will also be the beneficiary of contributions from the sale of a range of drinks sold at the meeting.

Ascot food and drink concessionaires also generously donated 1% of their sales during the week.

Over 2,500 plants that were used for site decoration were donated to four local gardening charities that help a range of people with disabilities and mental health issues.

All flowers from the fine dining restaurants are donated to Thames Hospice throughout the year.

A programme started in 2017 see ex-jockeys providing informative talks to Ascot’s fine dining guests in support of the IJF.

Royal Ascot guests were incredibly generous and the combined teams managed to raise a record sum of £14,295.45 for the charity.

Race-riding is not the only art form

On the final day of the Royal meeting, the six winners of the Royal Ascot Art Competition took part in an inaugural Guard of Honour for the jockeys ahead of the day’s racing.

The children were interviewed by Ascot TV’s host, Rupert Bell, in the Parade Ring and their winning artwork was displayed on the big screen for the 70,000 plus racegoers to view.

The children were also treated to a meet and greet with leading Flat jockey, Ryan Moore.

The children also enjoyed tribute music acts; a Mr & Mrs Claus grotto; a sensory area plus funfair and donkey rides.  There were over 700 attendees, including over 340 children.

Jane Gates, Founder of the charity said: “We have been overwhelmed by the many positive comments and compliments received thus far, acknowledging the incredible efforts made to accommodate the needs of our families, especially those with complex health needs. The warm welcome received and the sense of space and privacy afforded by hosting the event at such a prestigious venue was most appreciated.

“We would like to thank OMG Catering and 1711 for catering contributions; the Danter Family for providing free funfair rides; Paul Powers, Big Hand People and the volunteers from both the charity and our team at Ascot Racecourse for all their efforts in making this a truly memorable occasion for these families.”