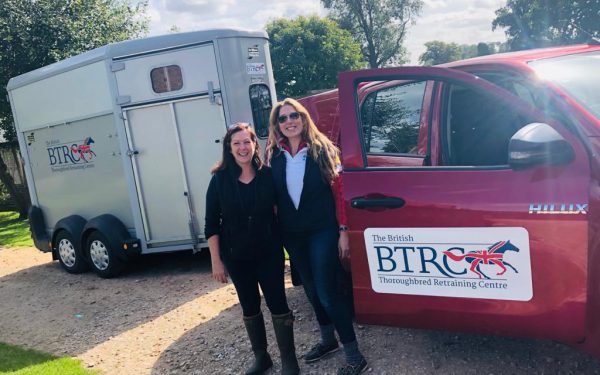 On the evening of 5th August, the British Thoroughbred Retraining Centre (BTRC) was broken into and a large amount of tack, rugs, boots, travelling and yard equipment was stolen, as well as all of the demonstration tack and equipment.

Following the break-in, the BTRC posted a social media appeal, asking for any unwanted items to be donated, such as tack/ rugs/ boots etc. to help replace the stolen items. The appeal went viral and the post was shared over 1,500 times and had over 178,000 viewers – then came the contact from all over the UK with offers of help.

What followed was a huge effort by BTRC supporters around the country to set up local drop-off points. In total there were 23 drop-off points arranged from Dumbarton in Scotland, down to Exeter in Devon and across to Norfolk on the East Coast. Volunteers at each point held donated items for for the BTRC until they we were able to collect it, some using their yards or places of work and others even using their spare bedrooms.

At the same time as this great nationwide effort, work began at the Centre to upgrade the existing security systems. Bay Camera & Communications Ltd worked at the Centre to install a state-of-the-art alarm facility and advising on all aspects of security on site. Whilst Little Engineering Ltd helped manufacture and transport new security gates to the Centre. A local BTRC supporter and friend of the charity, Ian Conroy kindly also gifted a large pair of security gates.

BTRC Chief Executive, Gillian Carlisle set off from her Lancashire base in the charity’s pick-up and trailer for a 600-mile round trip down the west of the UK, followed by second trip of 400 miles to the Midlands. As they had been inundated with donations, a third collection trip was needed, this time by Lauren, of over 550 miles to Surrey and back. A large number of supporters also visited the Centre to deliver their items – with an estimate of the appeal covering well over 2000 miles.

“A huge thank you must go to regular BTRC Volunteer Wendy Rodgers for helping to sort, clean and stock check every single item donated to the Centre.

“As well as all the donated items we have been supported by many, many people making monetary donations and supporting the Centre via our JustGiving Page. One local business, Pru’s Shoes even held a raffle for BTRC raising £100 in support of the appeal,” said Gillian Carlise.