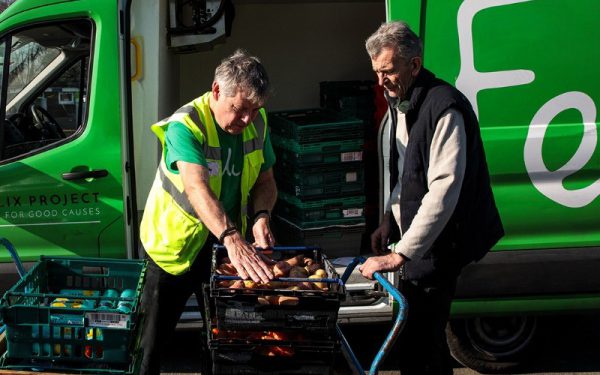 With racing set to go behind closed doors from tomorrow, we’ve discovered some brilliant examples of football clubs who have found creative ways to help their neighbours during this period of cancelled matches.

While over 75% of British racecourses already donate surplus food and flowers to good causes (usually in the case of abandonments), and many will naturally be helping out in their community right now, we’ve collated below some inspiration for how the sport is giving back to those in need.

Aston Villa FC donated 850 staff-packed lunches to local homeless charities when their weekend game was lost, while Tottenham Hotspur delivered over 1,200 food items to the Felix Project to distribute to local good causes, leftover from what would have been their Sunday fixture.

Staying in touch with older members of the community

Everton in the Community has been texting and calling elderly members of their community, particularly those suffering from social isolation to arrange access to emergency food parcels. Vulnerable fans have also not been forgotten as calls have been made to check on them.

Liverpool FC players have pledged support to make up shortfall in donations to help local foodbanks. It is understood that the players have committed to covering all of the shortfalls that we will incur as a results of not being able to hold usual matchday collections at Ainfield.

It is known that this isn’t the first time that the Liverpool players have shown this kind of support and the Liverpool fans have been quick to acknowledge that while the team has excelled on the pitch this season, this kind of gesture is even more important.

Using a platform to help others

Individual footballers are using their platforms to share advice on how to be responsible during the outbreak. Former Manchester City defender Eliaquim Mangala is one of five Valencia players and coaches who have tested positive for coronavirus.

Substituting a matchday pie and pint

Leeds United has urged fans to donate the equivalent of their matchday pie and pint to counterbalance foodbank shortages, raising over £1,000 in just two days.

I don’t think this is a moment where the thoughts of a
football manager should be important, but I understand for our supporters they
will want to hear from the team and I will front that.

First and foremost, all of us have to do whatever we can to
protect one another. In society I mean. This should be the case all the time in
life, but in this moment I think it matters more than ever.

I’ve said before that football always seems the most
important of the least important things. Today, football and football matches
really aren’t important at all.

Of course, we don’t want to play in front of an empty
stadium and we don’t want games or competitions suspended, but if doing so
helps one individual stay healthy – just one – we do it no questions asked.

If it’s a choice between football and the good of the wider
society, it’s no contest. Really, it isn’t.

Today’s decision and announcement is being implemented with
the motive of keeping people safe. Because of that we support it completely. We
have seen members of teams we compete against become ill. This virus has shown
that being involved in football offers no immunity. To our rival clubs and
individuals who are affected and to those who later will become so, you are in
our thoughts and prayers.

None of us know in this moment what the final outcome will
be, but as a team we have to have belief that the authorities make decisions
based on sound judgement and morality.

Yes, I am the manager of this team and club and therefore
carry a leadership responsibility with regards to our future on the pitch. But
I think in the present moment, with so many people around our city, the region,
the country and the world facing anxiety and uncertainty, it would be entirely
wrong to speak about anything other than advising people to follow expert
advice and look after themselves and each other.

The message from the team to our supporters is only about
your well-being. Put your health first. Don’t take any risk. Think about the
vulnerable in our society and act where possible with compassion for them.

Please look after yourselves and look out for each other.

For further ideas and if you would like support to plan how best to help your local community get in touch: lucy@racingtoschool.co.uk