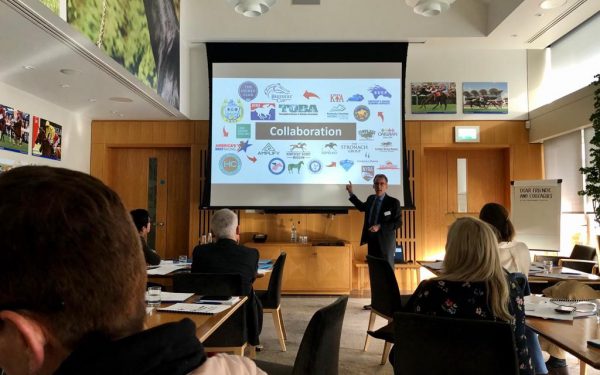 An ambitious plan to bring together representatives from the racing jurisdictions of Australia; France; Ireland; Japan; the USA and the UK came together last week by way of the Godolphin Forum for Education at Dalham Hall Stud in Newmarket.

The ambitious three-day event was set with the clear challenge to agree a global intention to prioritise the sport’s investment in education and community engagement by pooling and using the assets available to the global sport.

A Discovery day opened the floor to each country to update colleagues on their current programmes and biggest challenges, which set the tone for a consensus to be reached on the shared priorities. Repeated themes demonstrated that the racing world is small in many ways but has huge potential to inform and support future generations – represented earlier in the day by two pupils from the Newmarket Academy. They were graduated from the successful Beacon Programme, which has done much to connect young people in Newmarket to the sport and its wider career opportunities.

If it was needed, a reminder of the majesty and pre-eminence of the horse was provided to the delegates when they visited the Darley stallions – one of the world’s greatest sires, Dubawi being the star of the parade.

Throughout the Forum, the ideas and formative plans were captured through stunning wall murals that tracked the flow of discussion and set out clearly the journey from here to there: how the sport might achieve sustainable plans to use education to engage the young and to be a constant and reliable partner to its communities and their needs.

Rob Hezel from Grant body, The Racing Foundation assessed the UK’s position and it soon became clear that some of the current activities in Britain have huge potential overseas. The speakers across the three days formed a who’s who of the sport, led by trainer John Gosden, with support coming from Jockey Club Senior Steward Sandy Dudgeon and Cathal Beale from the Irish National Stud. From outside racing, delegates learned about the impact of intervention programmes from guests from the Chelsea Football Foundation.

Closing the final day, ITV’s Ed Chamberlin invited the group to reflect on the impact of working alongside international colleagues and to relay their hopes for the combined work to form a plan to meet a Vision for how the sport will look to the wider world by 2023.

A pledge to build a collaborative future was set within an open letter to the thoroughbred industry, approved and signed by the six countries and guest speakers. The idea is to hold to account the progress of the work and the shared vision to accept responsibility for the challenges of perception and participation. The delegates returned home with a renewed belief in how the sport can make a positive impact on society as never before.

Godolphin Forum for Education – Letter to the industryDownload