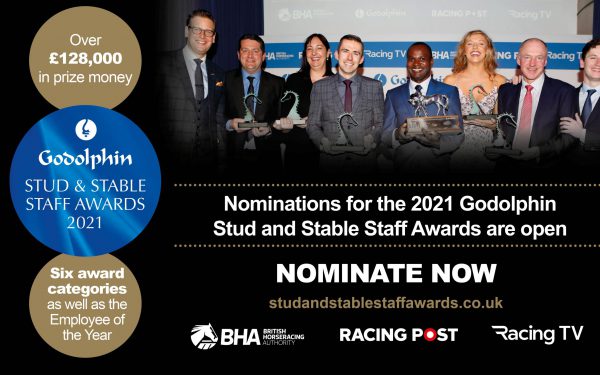 The Godolphin Stud & Stable Staff Awards have been described as “more important than ever” as the nominations window for the 2021 is now open.

Now in their 17th year, the awards recognise and reward the outstanding skills, commitment and contribution of over 10,000 stud and stable staff in England, Scotland and Wales.

The 2021 awards will look to recognise the extraordinary challenges faced by stud and stable staff in light of the COVID-19 pandemic, both during the suspension of racing to keep yards and studs moving and since its resumption to adapt to the changes brought by the virus.

The effects of COVID-19 have also brought changes to the format of the awards and judging process, with the judging day for the finalists on Monday, 22 February 2020 likely to be conducted remotely.

The subsequent awards ceremony will be replaced by an interactive virtual event, allowing finalists to be with their yards, studs, friends and family to engage with the ceremony from a familiar location. A celebratory event is being planned for the summer 2021, subject to the relevant government guidance.

Nominations will close on Tuesday, 10 November and can be made by anyone on behalf of anyone working in a yard or stud via studandstablestaffawards.co.uk.

Video nominations will again be accepted for the 2021 awards to ensure the nominations procedure is as fair and inclusive as possible for all those involved.

Further detail about the awards can be found here.

“In this extraordinary year it is more important than ever that we reward those dedicated, hardworking people who do so much behind the scenes of the racing and breeding industries.

“The challenges that both industries have faced during the COVID-19 pandemic have been on a scale unlike anything we have felt before, and those who work with our horses day in, day out have shown outstanding commitment in keeping our industries going.

“Godolphin is delighted to be continuing its support of these awards and we look forward to celebrating the achievements of stud and stable staff up and down the land again in 2021.”

Changes have been made to the prize money structure ahead of next year, to recognise the outstanding quality of shortlisted nominees in all categories.

Any applicant who makes the shortlist of 10 but does not progress to the final three will receive £250 to mark the significant achievement of making the shortlist and also to distribute existing prize money more widely, given the widespread financial impact of COVID-19.

It has also been announced that broadcaster Nick Luck will take over from Brough Scott as Chair of the judging panel. Eileen Harte, co-owner of successful consignor Keith Harte Bloodstock Ltd, will also be joining the panel for the first time, as will last year’s Employee of the Year, James Frank, in line with usual protocol.

“I’m in little doubt that in taking over from Brough I have some large shoes to fill. It’s a great pleasure to be involved in these awards and I’m sure that as ever the panel will have an unenviable task in picking the winners from what is likely to be as strong a field of nominations as there has ever been.”

The ‘Community Award (in recognition of Rory MacDonald)’ acknowledges those who have gone above and beyond their day-to-day role to support the stud and stable staff and made an outstanding contribution to benefit the wider racing community. The Awards provide an opportunity for the racing industry to highlight and thank the hard work put in by stud and stable staff across the country, and this award in particular acknowledges people who have gone the extra mile to make a positive difference to their community.