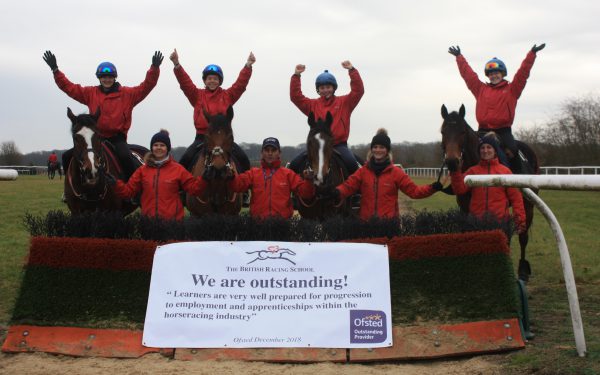 Following a recent inspection, the British Racing School (BRS) has been awarded the grade of ‘Outstanding’ by Ofsted – the highest grade attainable.

“The award of outstanding from Ofsted is nothing less than the hard working and dedicated staff here at the BRS deserve. They work tirelessly to inspire young people 365 days a year, year in year out. Hundreds of young people every year get their start in racing here at the BRS and go on to have long and successful careers.

The racing industry is working together to attract young people to work with thoroughbreds. The BRS is open to all young people regardless of previous riding experience, academic qualifications or social background. The School has regular Open Days and Taster Weeks for those wishing to come and see what we do”.

Following the full four-day inspection in November they have become the only Grade 1 Outstanding provider of its type in the Eastern Region, and as the leading provider of training for young people entering the racing industry they are delighted to be recognised in this way.

The racing industry offers tremendous career opportunities to young people and in addition to those from traditional equine backgrounds, the BRS – based in Newmarket – runs introductory programmes for those with little or no knowledge of racing.

“The British Racing School provides excellent training and development facilities for our industry, and we are delighted that their work has been recognised with an ‘outstanding’ report from Ofsted. Congratulations to Grant and his team”.

The original aim of the BRS was to provide purpose-built facilities to promote and encourage young people who had the potential to ride as professional jockeys.

In 2018 they trained 185 young people and found them employment in the horseracing industry.

Most recently they have run a very successful programme for the Prince’s Trust to bring nine 16‐25 year olds from East Anglia together for a week’s taster programme in horseracing at the BRS.

Multiple initiatives work across the industry to increase awareness of racing as a career path, and to encourage young people to choose courses at racing schools such as the BRS in order to take their first step and to receive the best quality training and support. Initiatives include Careers in Racing, Racing to School, Take the Reins and more.

Visit the British Racing School’s website for further detail on their courses.