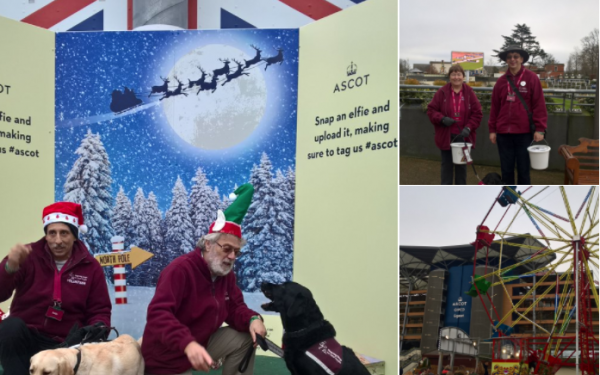 Hearing Dogs for Deaf People attended their fourth Ascot Raceday in late December to raise funds and to promote their work. The charity has for 35 years trained dogs to support thousands of people with severe and profound deafness to handle everyday tasks.

The charity trains three different breeds of dogs, which when matched with beneficiaries bring confidence and independence to those living with hearing problems, including young people. There are currently over 900 working partnerships nationwide, which are supported by 130 staff and around 2,000 volunteers.

Nicholas Orpin, Community Fundraising Manager for Hearing Dogs for Deaf People said: “I would like to thank Ascot for giving us the flexibility to allow eight volunteers to collect donations from racegoers, this gave us the possibility for each deaf volunteer/recipient to be partnered with a hearing volunteer which really helps for communication and safety.”

Nicholas is keen for the charity to continue its association with Ascot as there is an obvious synergy between their work and the sport, with many racing fans also being dog lovers. A number of the trained hearing dogs were on show at the racecourse, complete with clear branding that attracted the attention of the pre-Christmas crowd.