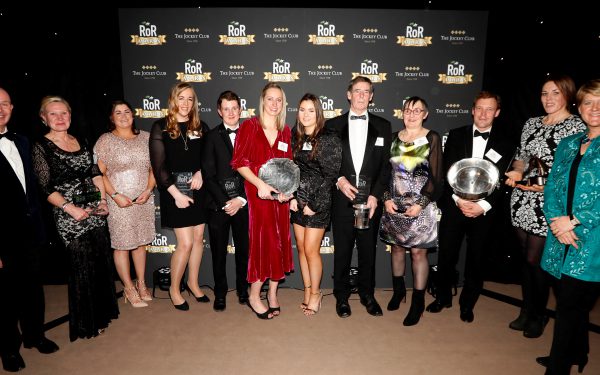 The RoR Awards held in Newmarket on Saturday drew a wide equestrian audience united in their passion and belief in the potential of former racehorses to excel across many other disciplines, regardless of their achievements on the track.

The charity was celebrating its first 20 years, which one of its key founders, Lady Emma Balding reflected was ‘not a promising start, but now is accepted by so many  professionals’.

The title of RoR Horse of the Year, sponsored by The Jockey Club, was awarded to Quadrille, owned and bred by HM The Queen. Dressage rider Louise Robson has developed this talented Flat horse into the highest performing thoroughbred on the UK dressage circuit.

“I am sure Her Majesty will be delighted. She has followed his progress since the first day we had him. And if Quadrille’s example encourages others to get a former racehorse and take up dressage or simply to hack it around for fun, that would be wonderful,” said his rider.

A new Award, the RoR Horse Personality of the Year was selected by author Jilly Cooper CBE  from 250 nominations and went to Ned Causer for his life-enriching partnership with owner Sarah Peacock.

“To win this award is just an amazing moment and I can’t believe that Ned has done this,” said Sarah. “He has really changed my life. I’ve suffered from depression and it is quite a debilitating illness and Ned has been such a turning point since we got him on New Year’s Day last year.

“We did our first dressage test together and I thought I was never going to be able to get out in front of people because I was so nervous and I put a lot of pressure on myself. But he helped me through it.”

Sarah Peacock accepted the Paul Mellon Trophy, named in honour of the late Paul Mellon in recognition of the generous bequest from his estate to RoR when the charity was first established in 2000.

Find out more about Retraining of Racehorses: