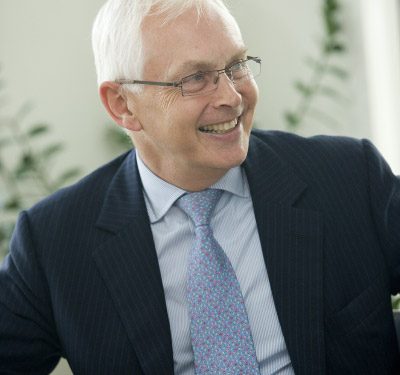 Ian Barlow has for some time been a driving force behind racing’s efforts to tend its roots in the community. The Chairman of The Racing Foundation has brought corporate experience, common sense and momentum to the sport’s unique ability to help others and improve its standing in society.

My first memories of racing trace back to the old Woodbine track in Toronto where we lived when I was a youngster. It’s long since been turned into a housing estate.

But in my teens my interest developed through attending the Grand National every year from 1965 (Jay Trump) to 1970 (Gay Trip). My father ran a factory nearby and he and Mrs Topham, the owner, did a deal. Since there was no lift in the County Stand and Mrs T couldn’t manage the stairs to the floor where the boxes were located, he lent her a fork lift truck and operator for the meeting and our family got free entrance!

More recently I became involved in the administrative side of Racing through chairing the Tax Group of the newly formed BHB in 1994. Finding myself surrounded by deeply knowledgeable racing luminaries like Philip Freedman and Nigel Elwes, I embarked on a steep learning curve that hasn’t stopped since. This led onto taking part in Lord Donoghue’s 2003 Stable & Stud Staff review, then chairing the RCA for six years before joining the Goodwood Board and the Trustee Boards of The National Heritage Centre and The Racing Foundation, all of which have been active partners in Racing Together, our sport’s Community Engagement programme.

I learnt over 20 years ago at KPMG the power of an active and focused community programme. Community engagement became integral to our business strategy, a powerful recruitment and retention tool, often asked about at interview and a factor in a competitive market for talent. Our people wanted to know not just how well the firm was doing financially but also what we were putting back into the communities within which we worked. Everyone was able to spend up to six days a year volunteering in the community, often in programmes developed by the firm in the areas of education and homelessness.

Our programme also resonated with many of our customers, who had similar programmes and values which we shared through our membership of Business in the Community to which racing is now affiliated. Finally, it contributed to our reputation with wider stakeholders including Parliament, Government and regulators who were important influencers on our licence to operate as a business. You never know when you are going to need friends.

So when racing decided to develop its own community strategy, supported by the BHA, I grabbed the opportunity to lead the project. Despite the challenges of creating something across so many different organisations that comprise the sport, I was much encouraged by the support we got which resulted in the Racing Together initiative that has been so well received, both within our sport but also crucially with Government and MPs.

Racing has been able to demonstrate not just well documented economic and employment achievements but also how important and active it is within the communities that our racecourses, yards, studs and other participants work. In short: that we are a force for good. That is very important when we ask Government for support for items like a reformed Levy and a post-Brexit regulatory regime and when we explain to the wider public about how we just don’t look after our own people and horses but also put a lot back into society.