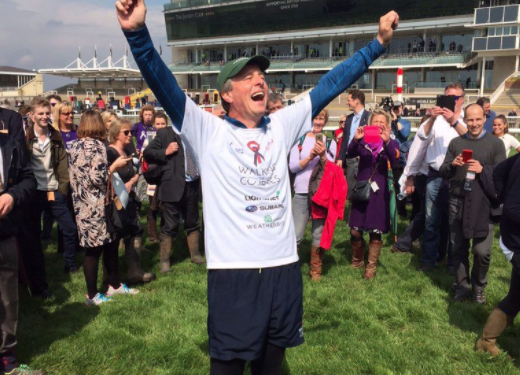 ‘If not us, then who? If not now, then when?’ Powerful questions that indefatigable walker and leading charity campaigner Richard Farquhar has no difficulty in answering.

Ever since racing first claimed me as a lifelong fan, it has been obvious to me that this is a sport which cares hugely for its participants: equine and human. Racehorses enjoy TLC on an extraordinary level. The established charities like Greatwood, Retraining of Racehorses and HEROS, all focus on their lives once their careers are at an end. The Injured Jockeys Fund is probably the best known of all the racing charities, while Racing Welfare, who provide fantastic support to all of racing’s dedicated workforce, is certainly raising its profile.

I am by no means unique in having visited every racecourse in Great Britain, but I suspect I might be unique in having walked between them. In linking all 60 of our courses during Walking The Courses, to raise money for two charities, of which Racing Welfare was one, there were many aspects that gave me real pleasure, notably the sheer beauty of the British countryside, of which I saw much over the course of the 2,910 miles that I walked.

But equally as striking was the sense of community that was evident at all racecourses, but most palpable at the smaller racecourses. Quite rightly, they make it a part of their modus operandi to be fully engaged with local people, local issues and local charities. Whether you go to Market Rasen, Musselburgh, Fakenham or Fontwell, you will witness the lengths to which racing goes to engage and involve local people and businesses.

Racing to School illustrates perfectly the way in which the racing industry can reach out to the wider community and achieve the dual objectives of being a force for good, whilst introducing the colour, noise, smells and excitement of racing to, in the main, completely uninitiated youngsters.

I was fortunate during Walking The Courses to encounter Racing to School in action on a number of occasions. To see the obvious pleasure that the schoolchildren were taking in their school day spent on a racecourse; to witness the determination in the race over the final 100 yards of the Derby course at Epsom; to observe the moment at which a mathematical concept was grasped, which until that moment standing on the scales in the weighing room had proved elusive. All this it to see the good that racing can do for young people. And when the horses come inside the final furlong with the children all jumping up and down by the rails, shouting for their fancy, it is impossible not to be uplifted by the impact that our sport can have, and in just a few hours.

Some, and hopefully a growing number, will take this early experience on when they return home. They may persuade their parents to take them racing, they may become avid viewers on television. In the fullness of time, they may even look to pursue a career that is racing-orientated. Many will get, as I have, a lifetime of enjoyment from the sport.

I undertook Walking The Courses, which was two years in the planning and execution, because I wanted to give something back to the sport that had given me so much pleasure over the years. Subsequently, I became a Trustee of Racing Welfare and have therefore seen, at first hand, the extent to which racing looks after its own and those in the wider world.

I sense no complacency, no sitting on laurels. There is more to do. But there is clearly an iron will from the charities involved in the wider Racing Together partnership and support by the BHA, to broaden the reach and provision of care to benefit stakeholders across our wonderful sport.