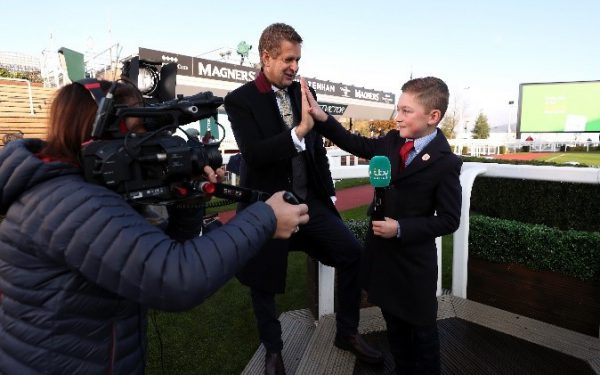 The search has finally come to an end as Cheltenham Racecourse unveils its new TV stars of racing as five of its Junior Jumpers™ appear in a new series called ITV Racing’s Mini Mes.

Each of the Junior Jumpers, aged between eight and 15 years old, was asked to audition by sending in a film of themselves and once chosen were matched with their ‘big’ presenter.

Episode one sees the mini mes meeting their doubles with an introduction of how to be a presenter and tips of what you should and shouldn’t do or say on air! Mini Ed opens the show with a warm welcome and then heads over to the pre-parade ring where Alice Plunkett and mini Alice are ready to chat fashion. Mini Matt Chapman chats about noise in the parade ring and, as always, what the racegoers are backing. Down on the track mini Oli Bell discusses the going while up in the stand in the commentary box, the binoculars are on standby in preparation for the first race. One tip for ITV racing commentator Richard Hoiles – NO SHOUTING!!

As their quest to become the next ITV Racing team continues, the Minis will prepare for a live show in Episode Two before taking the reins in Episode Three as excitement builds towards The Festival™ presented by Magners in March.

The first exclusive showing of Episode One will be on ITV4, The Opening Show from 9:30am on Saturday, 14 December. Keep an eye out on the channel and Cheltenham’s social media channels to see the full episode.

Junior Jumpers is a free membership for under 18s and has over 3,000 members, which relates to all four racecourses in the South West of The Jockey Club. Find out more here.