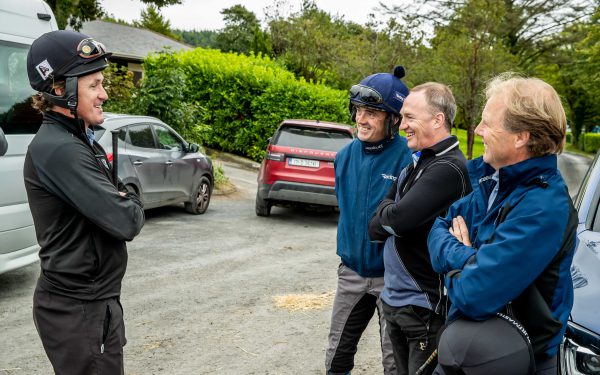 Five renowned champion jockeys will also be back in the saddle for the Pat Smullen Champions Race for Cancer Trials Ireland at the Curragh on Sunday, September 15.

Four of the greatest jump jockeys of all time, Ruby Walsh, Sir Anthony McCoy, Paul Carberry and Charlie Swan joined former champion Flat jockey and Classic-winning trainer Joseph O’Brien at his Piltown yard as the quintet continue to get their eye in ahead of the Longines Irish Champions Weekend. They will be joined at the Curragh on Sunday week by fellow champions Johnny Murtagh, Richard Hughes, Kieren Fallon and Ted Durcan in the nine-runner mile contest.

Charlie Swan said: “It’s obviously all for a very special cause.  I rode a few winners at the Curragh at the beginning of my career as an apprentice with Kevin Prendergast and one of my best memories of the time is beating Lester Piggott by a neck to win a handicap over the mile course that we’ll be riding. I was probably 17 at the time.  It is going to be a wonderful occasion and we are all very much looking forward to it.”

A day’s racing and lunch in the Gigginstown House Stud box at Cheltenham on Gold Cup day; VIP racing trips to the Dubai World Cup, Royal Ascot and Hong Kong and watching Liverpool take on Manchester United at Anfield are among the amazing auction items kindly donated for the auction.

There is also a unique illustration of Pat Smullen and the nine champion jockeys taking part in in the race by racing cartoonist Birdie and yard visits to legendary trainers Aidan O’Brien and Willie Mullins up for grabs.

The full list of auction items is now available to view at www.app.galabid.com/smullen