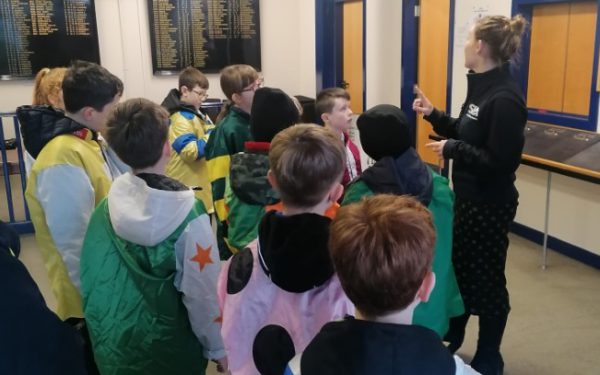 Scottish Racing at the Heart of the Community

Awards and racing in Scotland have gone hand in hand in recent months, and there may be more to come shortly, with Eleanor Boden, Scottish Racing’s community engagement officer, a finalist in next month’s Godolphin Stud and Stable Staff Awards.

Boden’s role, which was created in May 2018, was integral to Scottish Racing’s success as the first winner of the Diversity & Inclusion category at the RCA Showcase Awards in November, when Musselburgh was crowned best racecourse for Owners’ Experience, event host Hamilton Park scooped the Operational Excellence section and Perth took a highly commended in the Food & Beverage category.

Reflecting on the Showcase award, Scottish Racing Chief Executive Delly Innes says: “We were thrilled. It was very much a team effort, and we couldn’t have carried out any of our community engagement programme if we hadn’t got buy-in from all the courses.

“It’s to their credit that they’ve recognised the importance of community engagement as a whole and how our partnership with William Hill with Alzheimer Scotland can benefit the cause in Scotland.”

Boden, who was Education and Training Development Manager at the Heros charity in Lambourn before she joined Scottish Racing, works in association with Racing Together, the national body that represents and co-ordinates British racing’s community engagement across the industry. Eleanor also delivers Racing to School days as part of the team in Scotland.

Two major themes emerged when she took up the job – working with Alzheimer Scotland and supporting the Scottish government’s Developing the Young Workforce project.

Boden’s very first meeting with Ayr Racecourse Managing Director David Brown prompted the decision to get behind Developing the Young Workforce (DYW), which was started five years ago as part of the national government’s education policy to reduce youth unemployment and connect schools to local businesses.

“It was obvious that David was very strong on the subject of young people,” she recalls. “He said to me: ‘I’m from Ayr; I know there are areas of deprivation around here and I want everyone to benefit from the racecourse.’ That was very much at the beginning and the seed was sown.”

Brown’s commitment was shared by Iain Ferguson, Ayr’s head of PR, who as well as helping Scottish Racing and the Racecourse Association, in association with Drinkaware, to stage a pilot walking football tournament at the racecourse last summer, is central to organising Racing To School and DYW events at the track.

Ferguson explains: “We involve everyone at the racecourse in the DYW scheme, from groundstaff to the catering team, telling the children about Ayr’s history but also talking about the various employment opportunities that are available in racing and at the racecourse. Last summer we held eight events between May and July for over 200 youngsters from different schools.

Eleanor Boden takes up the story: “Every racecourse in Scotland has a local DYW, and I’ve managed to link them all. Now other places are keen to get involved. even though they don’t have a racecourse on their doorstep.

“Schools are happy to participate because it means they are engaging with local employers, and it fits perfectly for Scottish Racing and the start of the learner journey. It follows on from Racing To School, on which we work closely with Carrie Ford. Schools then realise there’s so much they can do with racing.”

Boden’s work with DYW extended to a careers’ focus day held at Ayr in mid-January.

She explains: “Thirty primary schoolchildren aged between ten and 12 attended. They had various activities, including a tour of the racecourse with Carrie Ford, and a lengthy talk from Iain Ferguson, which went down extremely well. The group had been quite challenging up to that point, but Iain engaged them by linking the employability issue to geography and history and demonstrating what the racecourse means to Ayr and Ayrshire.

“Some of them had ridden before, but some had never even considered a career with horses, but by the end of the day I’d say that 50% of them wanted to know about working in racing or with horses.

Making an impact for communities around Scottish racecourses

Boden’s impact has not gone unnoticed, and following her original nomination by Scottish Racing for the Godolphin Stud and Stable Awards, she will face the judges on 24th February as one of three finalists for the Rory MacDonald Award, which recognises an individual ‘who has made an outstanding contribution to either the racehorses or to the lives of those working within the industry, or on racing’s behalf in local communities showcasing the social responsibility of our sport.’

Delly Innes says: “We’re absolutely thrilled that Eleanor has been recognised in this way. To her it’s all about the individual and how they can achieve their own success.

“She’s very hands-on, passionate about her job, and in delivering our community engagement programme has helped us achieve more contacts with worthwhile causes around the racecourses and nationally.

“She deserves to be a finalist for her consistently outstanding contribution to the lives of those seeking to work within the racing industry.”