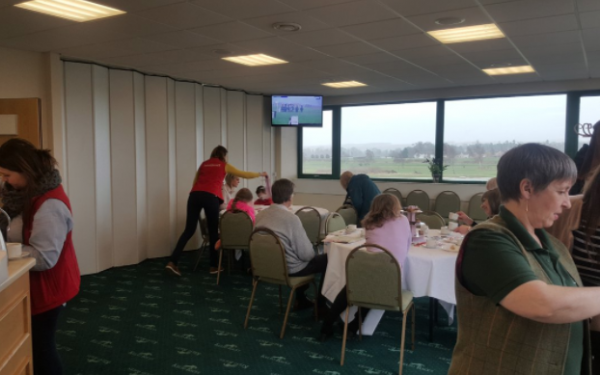 Members of the local community were invited to Kelso Racecourse on Thursday 12th April for afternoon tea and a chance to watch the first day of the Aintree Grand National meeting. The event, kindly hosted by the racecourse, was run by Racing Welfare and delivered with the support of Racing Together.

The atmosphere was warm and welcoming, allowing local racing enthusiasts to socialise and learn more about the great work being undertaken by Racing Welfare and Racing Together, which recently expanded into Scotland.

Kelso provided tea, coffee and scones whilst volunteers had kindly made cakes for the afternoon tea. During the afternoons racing there was plenty of conversation regarding the Fox Hunter chase and the main event which takes place on Saturday. The group also included a former employee of Floors Castle Stud, who was very impressed by the work undertaken by Racing Welfare.

Following on from this event, Kelso Racecourse plans to put on monthly coffee mornings or afternoon tea sessions for the local community.

Elanor Boden – Racing Together’s Community Engagement Officer in Scotland commented of the day: “This was a great way of engaging with the local community, using the power of racing to bring together individuals who would not normally cross paths, I look forward to being part of future events at Kelso.”