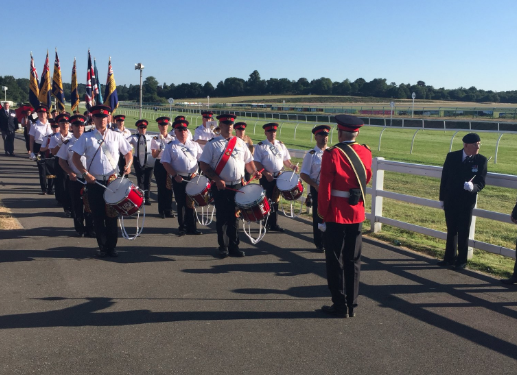 At the end of June, Lingfield Park once again hosted the Royal British Legion Surrey Branch for Armed Forces Day, a collaboration that stretches back 17 years. As part of the events to commemorate the centenary of the First World War, the charity will return to the racecourse on 28th July with a host of wartime military memorabilia, including a WW1 trench experience.

The charity arranged a parade around the racecourse of cadets, veterans and serving personnel, led by a marching band. The recent event saw the RBL sponsoring two races on the night and providing racegoers with the chance to have their photographs taken with military vehicles.

The RBL was also celebrating the contribution of Treasurer, Ron Pearce who had a race sponsored in his honour. Ron is still the acting Treasurer with the RBL Surrey branch and has been going to Lingfield Park since the first year of the partnership in 2001.

The charity had 100 or so supporters attending the evening meeting and raised around £2,500 via a bucket collection.

David Toulson-Burke, Executive Director at Lingfield Park said of the event: “Once again it was a delight to welcome back our friends from the RBL Surrey branch. This has been an on-going partnership with this very worthwhile charity over a long period of time and one which is always warmly received by our racegoers who are very supportive of our armed service personnel.”