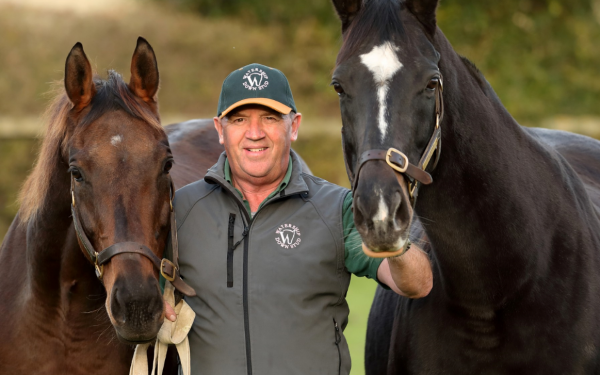 Long-serving Watership Down Stud Manager and 2017 Godolphin Stud and Stable Staff Award winner Terry Doherty reflects back on a year to remember, and why he’ll be clapping the loudest when his successor is crowned.

Thankful for the recognition
To even receive a nomination for these awards was something special. I remember feeling really good about my work and thankful for the recognition. Simon Marsh is Racing Manager for the Lloyd Webbers and he kindly put me forward. Stud staff can live in our own bubble –I’ve been in this role for 25 years – and I was unaware of the enormity of these awards until I got to London; how important they are to people.

When I made it through to the final, my competitive side took over. I found out who I was up against – their form, if you like.
On the day of the awards I wasn’t very well, but I spent the whole day just taking it all in.

When I was announced as the winner, I looked across at Simon and we both said ‘yes, we have done it!’ It was a very pleasant surprise and some relief, as it’s a long time from being first nominated. Relief and joy wrapped into one. It’s actually me that’s won!

Messages of support from everywhere
Winning gave me such a personal boost and told me that I must be good at what I do – just being entered was great for the self-esteem.
I was amazed the next day at the number of people who got in touch. There were trainers in America, bloodstock owners; I was getting messages and emails constantly saying congrats and heartfelt well done from some very important bloodstock people.

Andrew and Madeleine Lloyd Webber were delighted and sent me a message within five minutes, as they were on the ‘phone with Simon during the awards.

Trainers were also brilliant and winning this top award has made my circle bigger. It really was a case of a pebble in the pond and the ripples just not stopping.

I have always valued the opinion of my peers, both within my own farm and other Studs. Everyone said it was a good thing that the award was putting us all and the job into the public eye. We’re a small industry on the stud side and this attention has really helped people understand the work.

The press attention that followed would also never have come our way without these awards. I can’t recommend to employers strongly enough to please nominate your staff.

On the other side of the fence
I’m very honoured to be a judge of these prestigious awards, which I know Godolphin has now sponsored for 14 years. Just reading through the impressive entries for the Rory Macdonald Community Award opened my eyes to the depth of these achievements – there’s an opportunity for everyone: newbies and people who have been in racing all their lives.

Racing has that thing that no other industry has, an ability to gel together for the same purpose.

Getting them young
I’ve noticed that interest has definitely grown in stud work as a career. I’m asked more about who I am what I do.

I’m a great believer in young people getting a foothold in the industry and I am very happy to be a part of their careers. We take six-eight extra staff a year, and over the years we have had a lot come through the stud and I follow their careers and take a lot of pride in what they achieve.

Trainer Ed Walker patted me on the back and said, ‘I learnt a lot from you’. Journalist Nancy Sexton was another one we had here; we’ve had a lot of successful people come through and I get a great deal of pleasure from seeing people do well.

My advice is for youngsters to always come forward and ask, even if they find it all a bit daunting. A ‘no’ is just an opportunity for ‘yes’ later down the line. It’s easier then they think to get into, as it’s a small but friendly industry that needs young people to come forward. In my world, a lot of people are willing to help and get them involved and interested because we need them, they are vital.

Hitting the schools is key. I don’t come from a racing background but my parents and grandparents were enthusiastic about racing. Nowadays we need to break into the school environment and not rely on youngsters finding us.

I have constant a battle with colleges as I want them to join at 16, rather than having to go to college for two years, and maybe university, and then perhaps to have no interest. I’m a firm believer in going into schools and speaking to young people to get them interested in the sport.

An industry built on teamwork and mutual support
It’s my Silver Jubilee at Watership Down and we pride ourselves on having a long-term team. We have people who know their job, and it’s priceless to come into work each morning to a group that know what’s going to happen. I can walk off the farm and have confidence that my staff will deal with it, and they can have confidence in me to deal with situations if they arise.

Working alongside great people is priceless as you are hand in glove with them. I’m sure we will be nominating others for these industry awards in the years to come.

A far cry from my milk bottling days
When I was 15 at secondary school in West Yorkshire, a local farm came into the school and spoke to us, they were the people who got me to think about it as a career. We were invited up to the farm to see all the horses and told about a real career structure.

Back in the mid-70s the careers team were busy within the local community and prospective employers were invited into the school to talk to students about further employment within the Calder Valley.

One of these careers days was attended by a local horse breeder from Souter House Farm and Stud, located on a hillside just above Hebden Bridge. Even as a total outsider who already had employment bottling milk after school on a local farm, I actually sat up and listened. I liked what I was hearing and following the session anyone who wanted to was invited to a taster day on the farm. I met my first stallion the following Saturday, in fact six of them – all purebred Arabs. And that was it, I was hooked.

High hopes for the future
Without Godolphin putting on these awards, we wouldn’t be talking about all these different people in racing who do so many different jobs. They would have no way in joining together.

Whoever the winners are this year, I hope they all get the enthusiasm to carry on developing and to get the message out to widen the pool further. Everyone who is nominated deserves to be there; their enthusiasm will be increased simply by being nominated. Whoever wins my category should be very proud and I will be over the moon for them and be the one clapping the loudest.