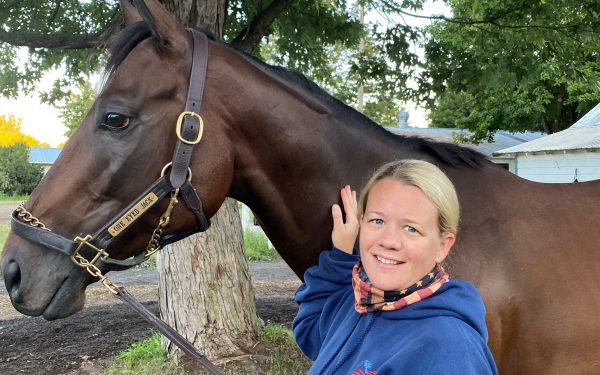 “Our goal is to educate guests about Thoroughbred Racing and have them fall in love with the sport,” says Cate Johnson, Director of the revamped National Museum of Racing and Hall of Fame in New York, which reopens on Saturday.

‘Renewed, renovated, and recharged’ – that’s my response when I’m  asked about the current state of the National Museum of Racing and Hall of Fame (NMRHOF), which has just completed a $12 million upgrade and will re-open to the public on September 5th, 2020 (ironically, this year’s delayed Kentucky Derby Day).

Committed to the mission 70 years on

Founded in 1950, and located in Saratoga Springs, New York (directly across the street from the oldest thoroughbred racetrack in America, the famous Saratoga Racecourse), the NMRHOF inducted its first Hall of Fame class in 1955.  Since that time, it has undergone a number of renovations and expansions, all with the goal of serving its mission: to preserve and promote the history of thoroughbred racing in America and honour the sport’s most accomplished participants in the Official National Thoroughbred Racing Hall of Fame.

By 2018, it had been over 20 years since the NMRHOF had started a capital campaign, and the Hall of Fame Gallery was running out of space to hold and display all the plaques honouring its inductees – 459 at present. We have four categories: Horses, Trainers, Jockeys and Pillars of the Turf. In addition, our Hall of Fame is unique because inductees can and are inducted while they are still active participants in racing. Given so many inductees enjoy long and successful careers, we need to find a way to keep track of all their achievements after their commemoration and their plaque has been installed on a certain date. We want to show the full picture.

On August 3, 2018, John Hendrickson, President of the NMRHOF and widower of horse owner and philanthropist Marylou Whitney, announced the Hall of Fame Education Experience Campaign. This was to be a three-year $20 million campaign to upgrade the Museum, specifically the Hall of Fame and Race Day Galleries, and to grow the endowment to ensure the future of the NMRHOF.

Replacing static plaques on the wall, the Hall of Fame now has nine, six-foot tall interactive touchscreens. Visitors can explore all 459 inductees, including their plaques, photo galleries, and achievements. Everyone is using a stylus right now owing to COVID-19 that is provided with admission. There is also a state-of-the-art film titled “What it Takes: Journey to the Hall of Fame.” Everyone is moved when they are watching.

Calling their own races

Also transformed is the Race Day Gallery, which now allows guests the thrill of a day at the races by introducing them to the Paddock, the Track and the Winner’s Circle.  Visitors can also explore artifacts and slideshows in this gallery, and there is an interactive exhibit named “Call the Race,” which encourages visitors to listen to one of four iconic race calls and then try their hand.  Their race call is then recorded and sent to their email address. There is even a photo opportunity to have a picture of yourself in the Saratoga Racecourse Winner’s Circle!

Our goal is to educate guests about Thoroughbred Racing and have them fall in love with the sport that we are so fortunate to work within. Alongside my day job, I’m never happier than when I’m hotwalking (relaxing horses after their morning training) for trainer Todd Pletcher, which I’m able to do four mornings a week.

I truly think that the ‘renewed, renovated, and recharged’ NMRHOF will engage the community and we can’t wait to open our doors this Saturday – Derby day itself – and we’ll be here every day from 9 a.m. until 5 p.m. only closing on Thanksgiving and Christmas Day.

Please visit www.racingmuseum.org to learn more about the Museum and the Hall of Fame.