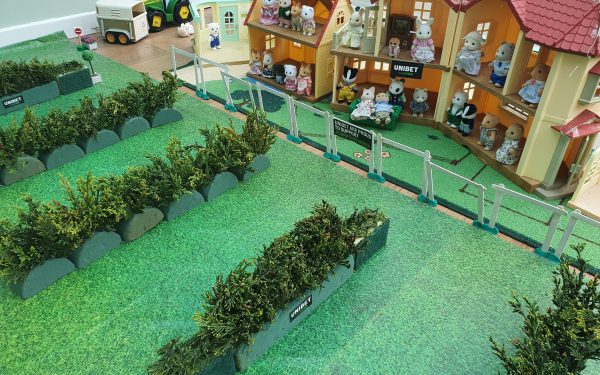 Debbie Matthews, who runs #GoRacingGreen, decided to use her daughter’s collection of model horses to bring to life some social media chats about what people would name their own horses. Following the announcement that the Grand National was to be cancelled this year, Debbie came up with the idea of running the horses in a mini Grand National, just for fun.

Trainers and jockeys then started to become involved in the event, including Bob Champion, Peter Scudamore, Nico de Boinville, Adrian Heskin, and Richard Johnson. There also been a response from  Pony Racing and Shetland Pony Racing jockeys, along with trainers Fergal O’Brien, Jonjo O’Neill, Martin Keighley and Lucinda Russell.

Commentary for the race will be done by ITV’s Richard Hoiles, and one social media follower has also donated trophies for the winning owner, trainer and jockey. Certificates will be sent to all the junior jockeys that are taking part in the race, and many of the spectators will still be dressing up for the occasion at home and are being encouraged to share their pictures.

International commentator Gareth Jenkins who commentates at events such as Olympia and the Olympics, has compiled a video of all the runners, trainers and riders, and Mike Cattermole will be doing a small introductory video for the event, both of which will be published prior to the actual race at 5.30pm. A course has been designed and created by Debbie in her home. The junior jockeys are also producing videos on social media to update followers on how they are preparing their ride for the race.

There are two prizes available – the owner of the winning horse, and all those who voted for it, will go into a draw for a long weekend break at Holiday Resort Unity in Somerset, long standing clients of Debbie that also funds every year for their chosen charity, The Injured Jockeys’ Fund. Those who voted for the horse that receives the most votes will also go into a separate draw, the prize for that being two Premier Enclosure tickets to a race day of their choice (excluding music events) at Newbury Racecourse, which is a #GoRacingGreen course.

Unibet Racing are supporting the event, and continuing to support #GoRacingGreen throughout, through their community sponsorship.

Every evening throughout the period of lockdown, there is an informal #GRGchat at 7.30pm which many people engage in; its sometimes themed or just a general chat about things. There is also an amateur drawing competition with the winner receiving a Birdie desk calendar. Penpals is run by Debbie’s daughter Nellie who is writing to anyone of any age who would like to receive letters throughout this time. Such was the interest for the Grand National, another 40 horses with owners are lined up and waiting to take part in the #GoRacingGreenGuineas on 2nd May.

Debbie said: “It is really incredible how people have got behind this. I have had many messages from people saying what a welcome distraction this is and how it is keeping them going. Certainly, it has given me focus as I have been struggling, as I am sure many of us have, in these unknown times.

“I was conscious that a lot of my followers were self isolating or on the vulnerable list, or already struggling with loneliness and various other life challenges that the Coronavirus situation is escalating, so I just wanted to do something fun and try and keep positive conversations going and keep their spirits up. As always, I am very grateful to Ed Nicholson and Unibet Racing for their support, and to everyone who is involved in this, I can’t thank them enough”

If anyone wishes to make a charity donation via the #GoRacingGreen website it would be split between Retraining of Racehorses and The Samaritans.

Information on the event, social media links and the voting form can be found here: https://goracinggreen.co.uk/%23grg-grand-national