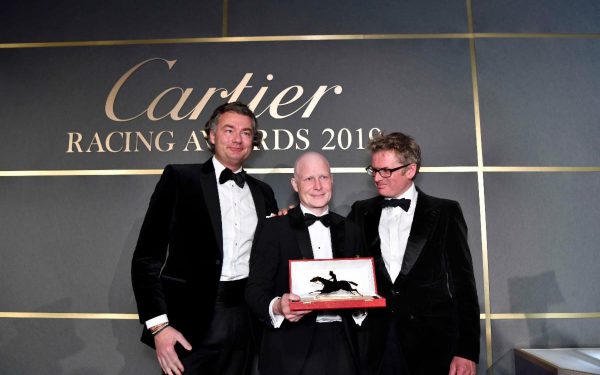 Pat Smullen is honoured at the 29th Cartier Awards

The Cartier/Daily Telegraph Award Of Merit for 2019 went to Pat Smullen at the Cartier Racing Awards, hosted on 12 November at The Dorchester Hotel in London. One of the outstanding jockeys of his generation and a nine-time champion in his native Ireland, Pat received devastating news in 2018 when diagnosed with pancreatic cancer.

A man of outstanding resilience, he has thrown all his efforts into helping others who face the same condition. His outstanding fundraising efforts have resulted in over €2.5 million being raised for Cancer Trials Ireland. At the Curragh in September he masterminded the Pat Smullen Champions Race For Cancer Trials Ireland, which saw stars from the past including Sir A P McCoy and Ruby Walsh return to the saddle.

Pat Smullen was present to accept the award and said: “What an honour to receive an award in front of such an illustrious crowd in a sport I would describe as the greatest industry there is.

“I would like to thank everyone at Cartier and the Daily Telegraph for an amazing night. It has given me great pleasure to be here. I have been so fortunate throughout my life to do something I love. I really think in the present moment we should appreciate what we have, and the special industry racing is. I have got to travel the world and that has all been made possible by horses. Horses are my life; have been my life and I just want to pay tribute to the winners tonight who are the equine athletes.

“What I have had to face in the last two years has been very difficult, but it has given me great pleasure and made me very proud to see what we achieved on Longines Irish Champions Weekend with HRI (Horse Racing Ireland) where we raised awareness for pancreatic cancer and it will make a huge difference to people going forward.”