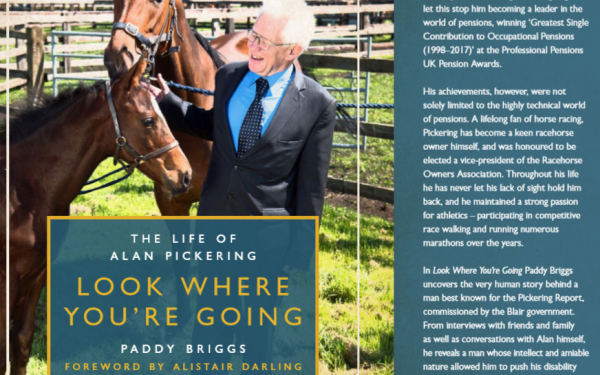 Racehorse Owners Association Vice President, Alan Pickering CBE is gearing up for the launch of his new book, “Look Where You’re Going” at Lingfield on 18th July. A percentage of sales from the book, which charts a life overcoming challenges will benefit charities close to his heart: the Injured Jockeys Fund and Moorcroft Rehabilitation Centre.

‘Look where you’re going,’ said the harassed Waterloo commuter as she collided with my white stick. This lady – whose outcry was probably more to do with shock than anger – certainly stands out in a crowd. Thousands of other strangers have seen my white stick as a friendly symbol rather than a threatening weapon. Never does a day go by without me having the benefit of a leading elbow to steer me through the crowds. One lady got it half wrong and half right when she suggested that I could see perfectly but was the victim of an elbow fetish.

This book is not a vanity publication. My hope is that those parents who have a child with an additional challenge do not throw in the towel but will realise that because their youngster cannot do everything, it does not mean that they cannot achieve anything. Hopefully, those youngsters who read the book themselves will realise that, while the pursuit of independence is laudable, maximum achievement can only be attainted if the dogged pursuit of independence is reined in by the willingness to accept assistance from those wonderful people who are only too willing to help.

I have been lucky in business (holding positions such as Chairman of the National Association of Pension Funds) and have been able to participate – with the help of others – in many sports: race walking; marathon running; cross-country skiing and even hobie cat sailing. However, my sporting passion is horse racing and this sport looms large in my biography, which has been splendidly crafted by Paddy Briggs.

Why Lingfield for the launch? Well, I live in South London and Lingfield is simultaneously my country retreat and second home. The folk there are wonderful.

Why are we donating £1 from the publication of each book to the Injured Jockeys Fund and Moorcroft Racehorse Rehabilitation Centre? Pictured on the cover of the book is our mare Primrose Valley, five of whose six victories were ridden by Frederick Tylicki (paralysed from the waist down after a race fall) – hence the IJF. The equine hero of the book is Robin Hoods Bay who, having benefited from Ed Vaughan’s TLC in overcoming leg problems, won the Lingfield Winter Derby before going on to a second career courtesy of Moorcroft. Representatives of both charities will be on our stand where we will be selling our book and providing further fundraising opportunities for the two charities.

My thanks to all concerned at Lingfield and I really hope people enjoy the book.