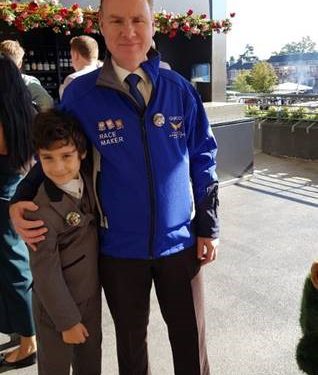 RaceMakers have become synonymous with the success and racegoer experience of the British Champions Series and at its recent finale at Ascot. Volunteer John Vincent explains why he loves the role and can’t wait for the chance to share his passion for the sport.

I have been a Flat racing enthusiast since I was a teenager, when I became a junior member at Newmarket Racecourse, just after I passed my driving test.

I discovered the British Champions Series (BCS) RaceMaker promotion on their website back in 2014 and didn’t hesitate to apply. Why? Well, apart from my older brother who introduced me to racing, I did not have anyone to share my passion with about the sport.

My first RaceMaking experience was also a first visit to the Investec Derby at Epsom. Engaging with racegoers, assisting them to really get the most from their racecourse experience is what the role is all about. I found this hugely enjoyable. Horseracing is all about opinions and you can have a lively debate with everyone about the merits of a horse or jockey on a big day when people are out to have a great time. I remember seeing Frankie Dettori winning on Golden Horn, a proper champion, and that made the hair stand up on the back of my neck as he completed his flying dismount. That was an experience I wanted again.

I was getting the hangs of things through the 2015 & 2016 seasons and one of my most treasured moments was when I was asked to accompany the great Lester Piggott to a jockey-signing session on Champions Day. We had a brief chat about the merits of the day’s runners and I really felt I was in the presence of greatness.

I also got a lot from giving guided tours to The Pony Club children and their families on Qipco 1000 Guineas day at Newmarket. In the weighing room I explained to the group who the top jockeys were riding on the day, and as I said his name, Ryan Moore stepped out of the changing room and came to say hello to the group. I love the chance to speak to children, some as young as nine, in my groups. I was really pleased when asked by Minty Farquhar, who leads the RaceMakers project to give The Pony Club tours at Ascot for the recent Champions Day, which turned out to be perhaps the best BCS day ever! It was particularly please as it was the first one attended by my son, Arthur, aged eight.

The role of a volunteer is important to me and the rest of my RaceMaker colleagues, so much so that when the clutch of my car broke at the bottom of the Sussex Downs in August, this year, I insisted that the AA Roadside assist engineer take me to the Qatar Festival at Glorious Goodwood, rather than tow me to a garage. I wasn’t going to miss out. The team really appreciated that I made it, and we’ve all become good friends. Volunteering is really life-affirming and gives me the self-belief that you can make a difference to other people’s enjoyment of life.

As I approach fifty years, I have set a goal for myself to spend the remainder of my career to work within the British Horseracing Industry, in particular to work with the public and how they enjoy our racecourses. My day job is away from the sport in the service industry but I am now halfway through the Thoroughbred Horseracing MBA course at the University of Liverpool, which will bring me a qualification to help me enter the industry for which I have such passion. But whatever the future holds for me, I can’t wait to be on RaceMaker duty again at Newmarket for the Qipco Guineas festival in the Spring of 2019!