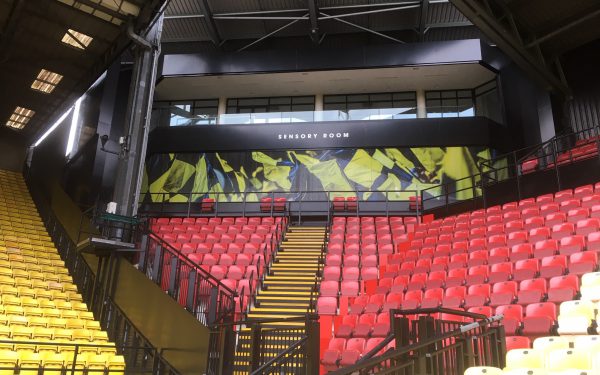 Racing can learn from trailblazers Watford FC in improving accessibility

With racing being the second largest spectator sport, it can be assumed that a significant number of learning disabled and people with sensory processing disabilities are racing fans. Important, then, for racing to understand these challenges and to create an accessible and inclusive raceday experience.

In the past, accessibility programmes have been aimed predominantly at overcoming physical barriers, not just in racing but in wider sport. More recently, Beverley has hosted racing’s first raceday with support for those with impaired hearing; Scottish Racing’s, William Hill’s and Alzheimer’s Scotland’s dementia awareness and training project has been making some striking progress. Nationwide, racecourses have also been exploring improving their accessibility for those with anxiety issues, using the expertise of accessible tourism officer and #GoRacingGreen ambassador Debbie Matthews. Increased understanding and knowledge is helping to break down barriers for less visible accessibility issues.

What is a sensory room?

The concept of a sensory viewing room was initiated in 2014 by the Shippey family at Sunderland FC. The Shippey Campaign supports and advises on implementation of sensory rooms nationwide. This has now grown to a point where multiple football clubs have implemented sensory viewing rooms, as far afield as Qatar.

A sensory room is a quiet space, away from usual matchday seating so that children and older people on the autistic spectrum can enjoy a match in a calm environment. There are also similarities whereby someone living with anxiety issues or dementia may benefit from use of a similar room as part of a wider accessibility programme.

At Watford FC, one-way vision glass and soundproofing allow significant control of sensory factors, with the added benefit of a separate, quieter entrance.

Bringing the game to life in a controlled way

The atmosphere at a sports event can be overwhelming owing to crowding, noise and smells. Access to a sensory room to watch a game can prevent sensory overload, and provide a calm space with stimuli to engage the senses. A sensory room means that those with sensory processing disabilities are no longer excluded from experiencing matchdays, with their family members or carers.

Paul Swain of the RCA reflected on the visited: “We were grateful for the opportunity to visit Watford FC’s sensory room as part of the delegation organised by Racing Together. Vicarage Road is home to one of football’s first, and best, examples of this kind of facility.

“It was striking how such simple changes can make a significant impact to the enjoyment of families attending a Premier League football match. We look forward to working with our fellow stakeholders through Racing Together to bring similar facilities to racecourses in the future and help make a day’s racing as inclusive as possible.”

The Vicarage Road stadium were one of the early leaders in implementing a permanent facility, as Accessibility Officer Dave Messenger explains:

“Watford FC recently celebrated the second anniversary of their Sensory Room opening. As a club with a proud family tradition, opening the Sensory Room has had a huge impact on children who struggle to cope with large crowds and noise levels at the stadium and their families. The room features a comfortably furnished viewing area, with an excellent view of the action and a state-of-the-art calming area with several Sensory features.

“So far, more than 70 families have attended a match, most of whom were visiting Vicarage Road for the first time. The feedback has been overwhelmingly positive and the families really value having a space where their children can enjoy the game, which they’d be unable to do in the general access areas of the stadium.”

Theo Canter, the six-year-old son of Upper Graham Taylor Stand season ticket holder Andrew, has so far been unable to enjoy matches with his dad and older sister, Ruby. Theo and his family became the first Watford fans to use the room at the recent match against Everton and thoroughly enjoyed their day.

“We are so delighted that the Watford FC Sensory Room is now a reality,” said Andrew.

“We have been incredibly impressed by the Club’s receptiveness and dedication in ensuring these facilities have been made available. The Sensory Room will make a huge difference to Theo and we look forward to coming along to more matches.”

The Practicalities – how could this work in racing?

Sensory equipment was funded by the Premier League Charitable Fund in association with the Lord’s Taverners and The Shippey Campaign. BT Sport has also been installed.

Places are subject to availability at Watford and a letter from a doctor/consultant or other healthcare professional may be required when booking. Parents also have the option to visit the room before matchday, if they wish to check its suitability.

At Watford, booking is directly with Accessibility Officer Dave Messenger. The club charges the same price that a child would pay for a general access seat (£18 this season) and each child is able to bring two adults, or an adult and sibling as personal assistants. They don’t charge for the extra two tickets.

A volunteer comes and takes a food and drink order from the families before kick-off, and returns with the order at half-time.

Trained experts on site to support and host the room

The room is managed by fully-trained staff with a background in working with children on the autism spectrum and is accessible from the main Vicarage Road. Every person using the room has different needs and so may only need to use the room for short periods, or throughout the day.

Find out more about football’s experience

Most learnings for sensory viewing rooms are taken from football, and the Centre for Access to Football in Europe have provided detailed useful guidance on implementing sensory rooms in stadia that might benefit. How to start on a project is also covered, with much of the detail applicable to racing. Visit their full guide here.