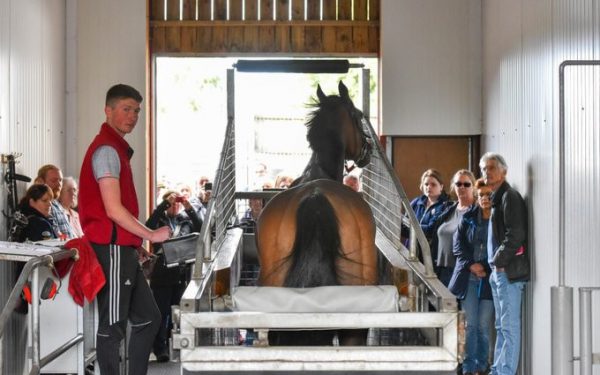 The racing yards of Malton and Norton were flooded with visitors on Sunday 15th September, with people taking their chance to visit some of the sport’s most historic training locations and meet the real stars in their stables. The open day was supporting the work of Racing Welfare.

The trainers and their teams behind all 13 open yards had put in a huge effort preparing for the arrival of the public and the training centre looked resplendent as visitors toured from yard to yard.  The Injured Jockeys Fund’s Northern base, Jack Berry House, also enjoyed a constant stream of interested onlookers throughout the day.

There was also plenty of activity outside the yards, with a fabulous demonstration from the Ravensdale Flyball team in the main arena.  The White Rose Saddlery Mini Agility Relay saw a maximum entry and was won by Pony Club members Harry Robinson and Tilly Mason who teamed up with jockeys Rachel Richardson and Rhona Pinder.

The Linton Pet Shop dog show attracted a huge number of spectators with their four-legged friends and is a real highlight of the open day each year.  The whole event was capped off brilliantly with a hog roast and live DJ in the gallops marquee, ensuring that everyone had the chance to catch up over a drink and see the day out in style.

Mark Loades, Racing Welfare’s Head of Fundraising, said: “ARC Malton Open Day was absolutely fantastic.  There was a superb atmosphere everywhere you visited and a great crowd gathered throughout the afternoon to watch and take part in the activities at Highfield Gallops.  A huge thank you from all of us at Racing Welfare to everyone who supported the event this year, including the trainers and their teams of staff, the team at Jack Berry House, our generous sponsors and event partners.

Money raised by the event will go towards funding Racing Welfare’s projects in the local area.  Each year the charity organises a large number of social and sporting events for people working in racing, alongside monthly coffee mornings, day trips and outings aimed at those who have retired from the sport.  Racing Welfare’s team are based at the charity’s offices at Old Maltongate and are on hand to offer support, advice and guidance to all of racing’s people.