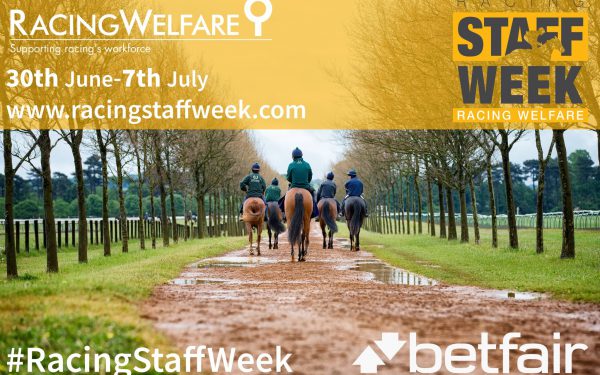 Racing Staff Week returns on Saturday 30th June. This great partnership between Racing Welfare and Betfair aims to bring the racing industry together to inform and engage horseracing followers and supporters about the passion, skill and dedication required to work in racing. Its purpose is also to increase awareness about the support and services that Racing Welfare provides to all of racing’s workforce.

Many activities are taking place across the week to recognise and celebrate all the great work and effort racing staff contribute to the sport.

Some of the nationwide activities include:
The ever-popular Racing Staff and Owners BBQ’s supported by the ROA, which will be taking place at trainers’ yards up and down the country.

Pontefract Racecourse will be hosting the Lifetime in Racing Awards, while in Malton staff will be putting on a ‘Pizza and Pub’ Social for local racing staff.

The Jockey Club will be offering stable staff at all 15 Jockey Club tracks free meals, teas and coffees throughout the week. It is estimated that the offer will provide 25,000 free meals.

Following on from the success of last year’s Racing Staff Week film, Equine Productions will once again be producing a film for the week. All racing staff are encouraged to send content for the film, which will be broadcast at racecourses, television and social media.

Doncaster Racecourse will host the Racing Welfare Charity Raceday, sponsored by Betfair on Friday 6th July. This day is now in its fourth year and is the pinnacle of Racing Staff Week and will also include the Betfair Clock Tower Cup, a race exclusively for stable staff who have been nominated by their trainers.

New for the 2018 Racing Staff Week is The Betfair Racing Staff Week Cup at Newton Abbot. The charity race, in which trainers nominate members of their staff to ride, complements the established Doncaster equivalent, which takes place on the same day.