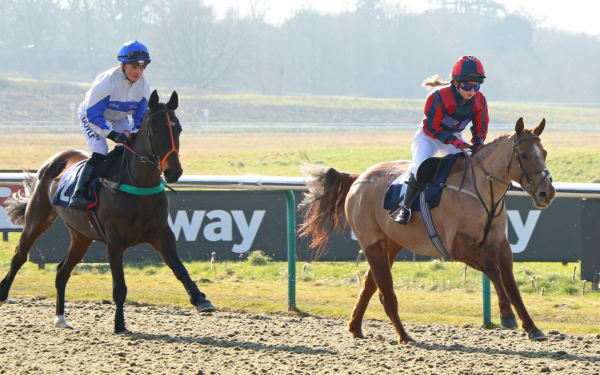 Racing stages a day to remember for young Lily Clare

Lingfield Park was the venue for one young girl’s racing dream that became a reality on 24th February. Ten-year-old Lily Clare Slade has been riding for over half her life despite suffering from a serious lung condition.

Her dedication paid off with a rare opportunity to ride around Lingfield, leaving professional jockey Hollie Doyle in her wake to the delight of the 1,300 strong crowd.

The charity Dreams Come True was approached by Katie Margarson, Assistant trainer at Margarson Racing, who in turn set the wheels in motion with the team at Lingfield. Clerk of the Course George Hill got the necessary sign-off from the British Horseracing Authority, and Debbie Hay, PR & Partnerships Manager was on hand to make this a memorable day for the aspiring lady jockey.

The team at Lingfield were generous hosts to Lily Clare’s family and a team from the charity, who were all given the full owners’ experience, enjoying lunch in the Trackside restaurant after Lily Clare had put willing pony Honky Tonk Girl through her paces.

Chairman of the racecourse’s parent company, David Thorpe conducted a post-race presentation and Lily Clare had a very special meet and greet with racing superstars Ryan Moore and Sir AP McCoy. As if that was not enough, the TV spotlight was also on the Kent schoolgirl with an appearance on ITV’s The Opening Show and an interview on At The Races as she stood proudly in the winners’ enclosure.

Lily Clare said: “I took my first horse-riding lesson on my fourth birthday and have practised twice a week ever since. When my Mum asked me what my biggest dream was, I immediately said that I wanted to know what it was like to be a real jockey, riding a racehorse in front of lots of people. Today I’ve been able to do that.”

Katie Margarson added: “Hollie has been amazing today – really encouraging Lily Clare. But the real star has been that little girl. She has carried out television interviews, ridden the pony and met scores of strangers, but is taking it all in her stride.”

Lily Clare’s mother, Elane, admitted she was in tears watching her little girl fulfil her dream. “The whole family is here to cheer her on and it was so emotional.

“She’s been through a lot since she was diagnosed with the rare lung condition, Bronchiectasis, so to see her so happy today means the world to us.”