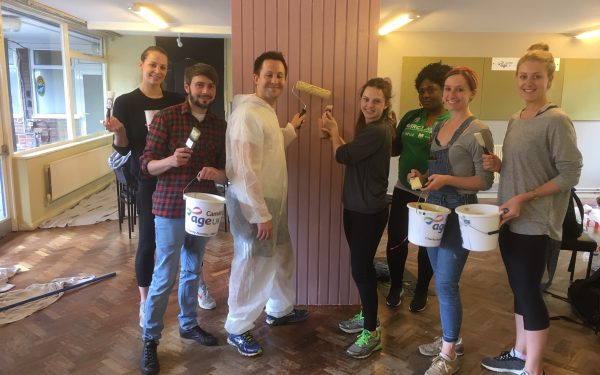 As part of Racing Together’s employee volunteering efforts, which involves staff across the sport giving back to local communities, a team of seven enthusiastic painters set about giving a much-welcomed makeover to the living area at Age UK’s Henderson Court in Hampstead, North London.

The staff, all based at racing’s administrative headquarters in London, represented Great British Racing (GBR) and GBR International; Racing to School; Racing Together; the British Horseracing Authority (BHA).

The centre is a real community hub and visitors were interested observers as the team transformed the room to subtle shades of magnolia, pink and grey – something of a respite to the previous rather brighter choices of 10 years earlier – as seen below.

Embracing the Racing Together Community day concept, which culminates in nationwide activity on May 9th, the team can now add painting and decorating to their skillsets.

Centre Manager Brian O’Connell said: “What an amazing job you guys have done to the room; the benefits to members and staff will be tenfold. We simply would not have had the resources to carry out such works.

“It’s down to teams like yours that really bring a benefit to the lives of older people living in Camden, through works such as this, that will brighten and freshen up the space where so many activities take place. On behalf of all the older people of Camden – thank you!”

Joe Rendall, who works for the BHA’s communications team was swift to don his overalls.

“It was great to see how the centre worked and understand just how important a role it plays in the community around Camden,” said Joe.

“Re-decorating the room, which the centre may not have been able to have done otherwise was a rewarding experience, too, and hopefully the visitors and the staff will enjoy it.”

Find out what other activities are planned for Racing Together Community day here and read about the recent careers day hosted at the BHA’s High Holborn offices.

Keep an eye on social media channels and #RTCommunityDay to keep track of the activity of almost 60 racing businesses who are getting involved in some way this year to help others.