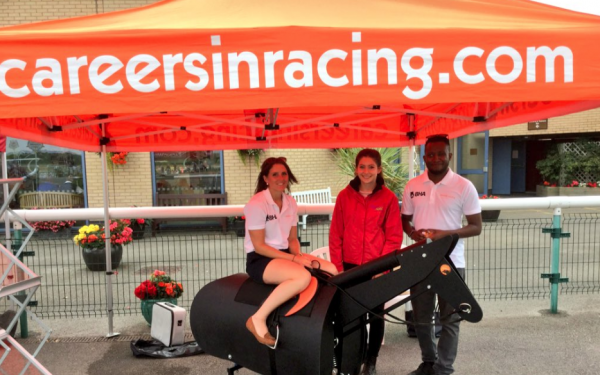 Last week the Go Racing in Yorkshire Festival took place and at the heart of the festival were Racing Together partner Careers in Racing.

The second day of the festival took place at Redcar Racecourse on Sunday with a 1940s themed day with beneficiaries Help for Heroes, a detailed account of this day can be found here:
Full story

Careers in Racing had a demonstration team present to show volunteers how to ride an Equicizer – as well as the popular Jersey ice cream van. It was a memorable afternoon spent at the races that will hopefully encourage more people to go racing.

On Thursday, the Careers in Racing team headed to Doncaster, where they had to battle the elements of a Yorkshire Summer – going from blazing sun, to rain, to thunder & sun again through-out the evening. Being bright orange and with a horse under their gazebo, the children’s eyes were soon drawn to the area, along with Racing Welfare beside them. Despite the conditions, parents were still keen for their young ones to jump on the Equicizer and have a go at being a jockey. After a little encouragement they were soon ridding away and enjoying themselves despite the testing elements.

As news of the Equicizer spread and more youngsters started to run over to have a go, it gave the Careers in Racing team the chance to explain to the parents about the many career opportunities and day-out ideas racing can offer. Especially with it being the start of the summer holidays, there is plenty of time to get out and enjoy the children and family branded race days across the country. Along with handing out some Careers in Racing pens and other promotional material, the children were informed of the different career paths racing can offer them in the colourful handouts.

The team explained to the parents that they were not just looking for jockeys, and the industry actually has a number of courses available that can help those who may not want to ride too. A representative from the Northern Racing College, which is based locally to Doncaster Racecourse, was also on hand to answer any questions, along with handing out some prospectuses.

A joint effort from the Careers in Racing and Northern Racing College staff, they were able to give young race- fans a wealth of knowledge on the various career paths available in the industry and that not everybody working in the industry wanted to be the next Ryan Moore or Lizzie Kelly. With the college being a stones throw from the racecourse the local young people appeared keen and engaged to discover what is available to them and the college prospectuses were taken by all.

Sean Simara, Careers in Racing Marketing and Recruitment Assistant said of the day: “We encouraged everyone we spoke with to have a look at the careers map on our website and the case studies. With the age of the audience being fairly young we felt that it would be beneficial for them to explore the various career paths available and open their eyes to the number of roles available.”