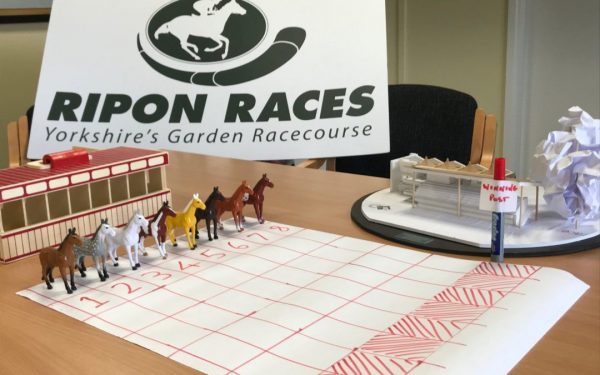 After the huge popularity of the Ripon Winter Dash – a toy horse race staged during the Equine Influenza outbreak in February – Yorkshire’s Garden Racecourse is bringing the toy horses out of retirement for the Ripon Christmas Charity Dash!

Run over six furlongs, or rather squares of paper, the horses move forward one square each time their corresponding number appears from a pack of playing cards, with the first to appear six times being the winner. The February renewal achieved over 400k organic impressions on Social Media with everybody who selected the winning horse (Number 2) winning a ticket to a Ripon meeting of their choice in 2019.

For the Christmas renewal the eight horses have been auctioned, with the highest bidders, their toy horse name and recipient charity of choice listed above.

The race will be run and uploaded to Social Media at midday on Christmas Eve, with the prize pool split between the charities nominated by the ‘Owners’ of the 1st, 2nd and 3rd-placed horses.

All of the charities nominated will receive a Pair of Club Enclosure badges, which can be used as raffle or auction prizes to raise funds and the prize pool will be bolstered by William Hill, long standing partners of Yorkshire’s Garden Racecourse and sponsors of the William Hill Great St Wilfrid, who will run a book on the race with any proceeds added to the prize pool.

People will again be able to enter their selection on Twitter and Facebook with everybody who selects the winner entered into a draw for prizes, including a VIP Day out for four to the William Hill Great St Wilfrid 2020 and a Joint Membership to the Racegoers Club.

James Hutchinson, Managing Director and Clerk of the Course said: “The inaugural toy horse race was really well received with great social media reach. We’re hoping for more of the same, with the race scheduled for Christmas Eve, a blank day in the racing calendar, we hope to generate some funds and some exposure for some great causes over the festive period.”