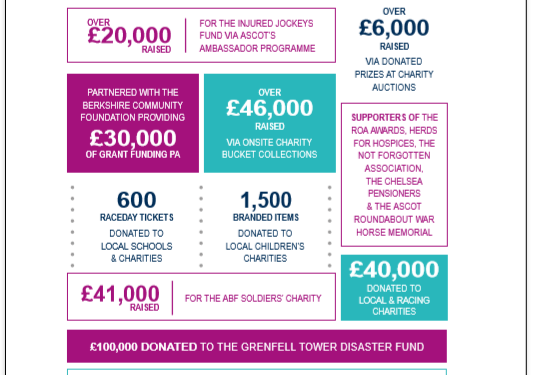 As the pomp and ceremony of the Royal meeting gets underway, Racing Together’s partner Ascot can be proud of their widespread community support of last year, and also two special projects this year to coincide with the best five days of Flat racing that the sport offers.

The Ascot Schools Art Competition
This art competition involved schools from the local area drawing Royal Ascot-themed designs with the chance of them being displayed in the Heath Tunnel. Pupils aged 4-11 from 12 local schools submitted work. The full story can be seen here: Ascot Heath Tunnel

War Horse Memorial
Ascot’s support of the War Horse Memorial project led by Alan Carr MBE, will see a bronze horse erected on the nearby Heatherwood Roundabout. This is in memory of the millions of UK, Commonwealth and Allied horses, mules and donkeys lost during The Great War. Beneficiaries of the memorial will be The Household Cavalry Foundation and Mane Chance Sanctuary; Brooke; World Horse Welfare and the local Blue Acre Horse Rescue. The racecourse has also donated a number of artefacts, which were blessed at a church service, attended by veterans’ families. The artefacts will then be buried in a time capsule next to the Memorial below the horse’s bowed head. A plaque is also being erected in Car Park 1 so that passers by can read about the statue, which was unveiled on June 8th.

Charitable activity in 2017
Ascot Racecourse has raised £1.1 million pounds for the Prince’s Countryside Fund charity over the past three years – an amazing £380,000 last year. Not far behind was the impressive £320,000 raised via The Property Raceday for children’s charities. As the one year anniversary of the Grenfell Tower disaster has just passed, it is timely to acknowledge Ascot’s £100,000 to the Disaster Fund. Over £46,000 raised for various charities via onsite bucket collections, and 1,500 branded items were donated to local children’s charities, with 600 raceday tickets donated to local schools and charities.