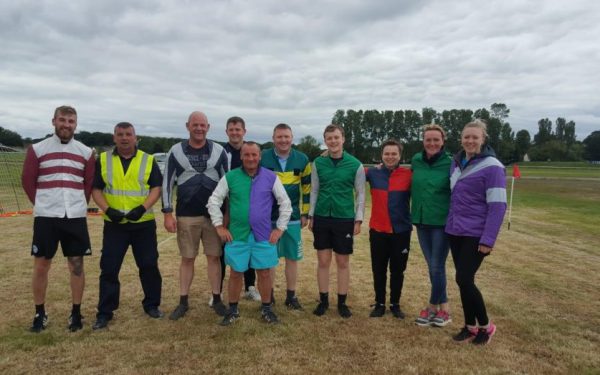 Scottish Racing has joined forces with national alcohol education charity, Drinkaware, and the Racecourse Association with plans to stage walking football matches at all racecourses across Scotland.

The objective is to improve, maintain and promote the physical, mental and social wellbeing of older adults through low-impact sport.

Through these tournaments, Drinkaware will provide vital information to participants on their health and alcohol consumption, allowing them to make more informed choices about their drinking habits and subsequently try to improve them. Drinkaware will use its partnership with The Scottish Football Association and Walking Football Scotland to facilitate the walking football element of this initiative with Scottish Racing, with the goal of educating participants on the dangers of excessive alcohol consumption and the benefits of regular exercise.

A pilot tournament was held at Ayr Racecourse last week, which saw 50 participants from Scottish Racing, Ayr Racecourse, the Racecourse Association, William Hill, Alzheimer Scotland and Walking Football Scotland, with a view to hold more tournaments across all Scotland’s racecourses.  Those involved also received a behind-the-scenes tour of Ayr Racecourse, which would not usually be accessible to those attending a race meeting.

“Drinkaware’s mission of promoting healthier lifestyles through a reduction in alcohol consumption, dovetails with that of our existing partners, Alzheimer Scotland, with whom we already work to promote physical activity and reduce social isolation.  By informing more people about responsible drinking, we can also send a message that this can assist in the prevention of mental and physical illness in later life.  Walking football is the fastest growing sport amongst men over the age of 45 with clear health benefits to anyone who may have concerns over their relationship with alcohol, or who may be living with dementia.”

“Working in partnership with Scottish Racing is a fantastic new opportunity, which allows us to work directly with communities across Scotland to help even more people make better choices about their drinking.”