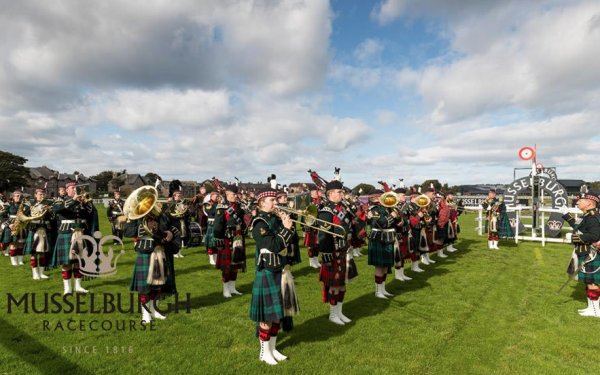 Services out in force on Family Raceday at Musselburgh

On Sunday 30th September Musslebrugh Racecourse welcomed The Royal Regiment of Scotland and Massed Bands to add a unique atmosphere to the raceday.

The Regimental Mascot, Shetland Pony Cruachan IV and all bands were paraded on the racecourse at the start of the day, marching down the finishing straight. They played throughout the day at various locations to the delight of the crowd who had come along for the tracks’ penultimate meeting of the year.

A variety of interactive Armed Forces displays were positioned around the grounds, supported by 105 Regiment Royal Artillery. A climbing wall and assault course for brave racegoers was staffed by members of the Lothian & Borders Air Cadet Force.

The Scottish Fire and Rescue Service were also on site with a number of officers from Police Scotland making it a real day of celebration for the public and a chance for them to appreciate the selfless work of those in uniform.

There was a range of free activities, including trampolines, fairground rides, face painting, and a balloon artist. Casper the Unicorn was a special guest and photo opportunities were available with the rare breed Eriskay pony.

Mussleburgh Racecourse Marketing Manager Aisling Johnston said: “This has been of our biggest family race days of the year and we hope everyone has enjoyed supporting our fantastic services who are ready to respond to our emergencies week in week out.

“The thrill of live racing combined with our Support Your Services family day has been a great way to finish the last weekend of summer on a high.”

An Army spokesperson said: “It is always a pleasure to be back at Musselburgh, carrying on a long military connection with the ‘Honest Toun’. The soldiers at Musselburgh Racecourse are represented by The Royal Regiment of Scotland and 105 Regiment Royal Artillery. In addition, cadets and Cadet Force adult volunteers from Lothian and Borders Army Cadet Force have run various activities.”