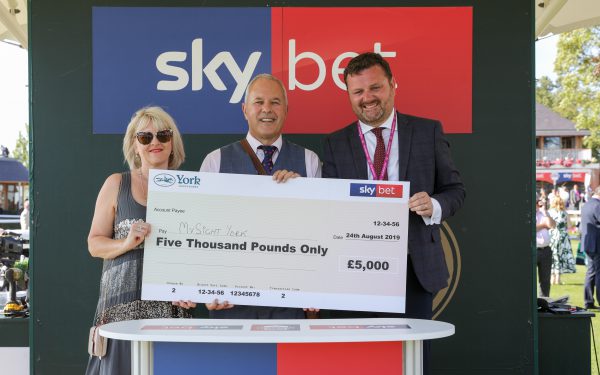 The twenty-two local charities & community groups that could have benefited to the tune of £5,000 from the inaugural Sky Bet Ebor Community Fund were in attendance on the Knavesmire on Saturday 24 August to watch the big race. Each charity was allocated a horse to follow at random, with the winning charity receiving the grant.

Mustajeer, trained in Ireland by Ger Lyons was the first winner of a £1million Sky Bet Ebor. As jockey Colin Keane jumped the horse out of Stall 2, it means that MySight York won the £5,000 award.

The giant cheque was collected by an excited Chairman, Jim Wallace, who said, “what a great gesture for local charities. Obviously all the better when Mustajeer won. As a small local charity the £5k is a significant amount of money to us and will benefit the partially sighted users of our services in York and surrounding areas.

The representatives of the other 21 local good causes enjoyed a complimentary afternoon at the races, benefitting from some of the publicity provided by York Racecourse as part of the Ebor Community Fund shortlist. You can find out more about the full list of charities involved here.