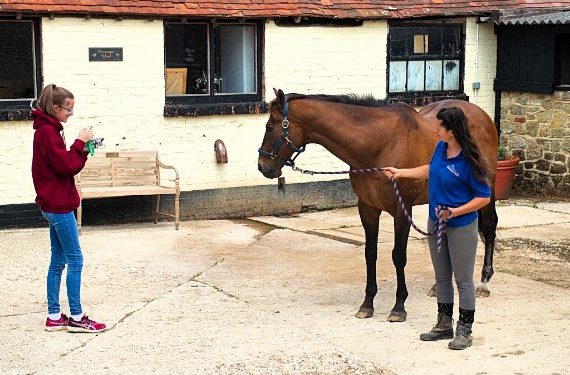 Annabel, 14, from Bedford Modern School wanted a charity project for this summer, but opportunities during the coronavirus crisis were limited.  Prompted by her Milton Keynes neighbour David, who is a Patron of The Racehorse Sanctuary, Annabel volunteered to make a film of the charity’s operations in West Sussex, using her drone mounted camera.  Filming this way is one of Annabel’s hobbies and she had already videoed other smaller projects, proving it is possible to continue while following social distancing restrictions.

Annabel persuaded her father to fly her to Mulsey Farm one Saturday by helicopter to film the Sanctuary’s horses.  Annabel had never been close to horses before, but this didn’t show.

David Ray, Patron of the Racehorse Sanctuary, said: “Annabel has done a fantastic job to capture the idiosyncratic character of The Stables at Mulsey Farm, incorporating the Passmore Yard and the Peter O’Sullevan High Dependency Unit. All this while highlighting the health and vitality of the Sanctuary’s older residents, exemplified by 29-year old Hong Kong Champion Mr Vitality himself.

“Can you spot in the film his Hong Kong Racing Club tattoo as Mr Vi is led out in the yard?  And yes, that is him cavorting in the paddock with his chums – a credit to the dedicated commitment of Graham Oldfield, Sue Collins and their team to the welfare of the former racehorses in their care.

“Talk about the technical wizardry of youngsters these days: before filming Annabel investigated producing quieter rotor blades for her drone on her 3D printer, so as not to disturb the horses as much, but worried that might sacrifice the stability of flight needed for filming!”

Annabel edited the material she had filmed to produce the three-minute promotional video – all her own work on a computer she had built for herself. The promotional video is now being used by the charity to showcase their facilities, raise awareness and funds for their activity rehoming racehorses. The Trustees of the charity have written to Annabel’s headmaster to express their appreciation of her efforts on behalf of the charity.

Find out more about the Racehorse Sanctuary here.