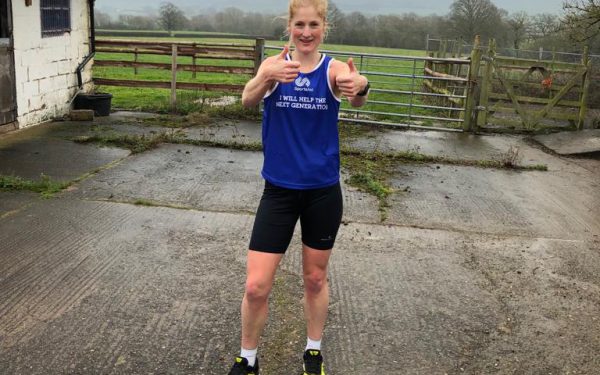 “The first four marathons should be okay, it’s the next three that are the mental challenge!” So says racing’s Susannah Gill a week before supporting SportsAid by taking on the World Marathon 777 Challenge.

Susannah is Director of Communications and Corporate Affairs for Together for the Tote, also known as the Alizeti Consortium and is a committed marathoner more than able to live up to her twitter handle of ‘The Iron Lady Runs’. Come January 31st on a start line in Antartica, Susannah enters a new world as the first of seven marathons in seven days on seven continents gets underway!

It all kicks off in Antarctica and from there, I will move through numerous time zones as I visit Cape Town; Perth; Dubai; Madrid and Santiago, before finishing in Miami on 6th February.

This is a challenge which fewer than 200 people have ever completed with Sir Ranulph Fiennes being the first in 2003. While I’ve run plenty of marathons, I have never done anything like this. The challenge will see me running 295km (183 miles) and travelling over 55,000 miles in 168 hours.

From what I have learnt it appears the training can get you through the first four races but marathons five to seven are very much a mental challenge…..so here goes!

I consider myself a fairly sensible person but there’s something about running which makes me think with my heart not my head. That’s the only logical way to explain why I voluntarily – indeed willingly – signed up to run the 777 challenge.

Training has been a mental and physical process of preparation. When not running I have been reading about how to keep running; eating a lot of food (especially toffee crisps!) and sleeping incredibly deeply as my body recovers from the physical impact of all the miles.

It was all a secret to begin with, when last September under the guidance of Mike Antoniades, founder of The Running School, I set about equipping myself for this incredible challenge.  Rather than going out for a nice head-clearing post-work run, I found myself having to do 20 x 90 second sprints (horrid!) or 8 x 4 minutes pieces of work on the treadmill (really horrid!). But it all worked as by November I could run back-to-back marathons and still be sound the next day.

As I stepped up the training, I started to confess to family, friends and colleagues that I had signed up. I also decided I wanted to raise money for SportsAid, which supports our next generation of athletes.  We all get such a thrill from watching Team GB’s superstars but without SportsAid’s backing many of them would never get the opportunity to fulfil their potential.

The 777 challenge seemed a perfect fit with SportsAid’s work, which is to give equality of opportunity for the next generation of Great Britain’s athletes.

Even the great Paula Radcliffe MBE acknowledges what the charity did for her career: “I was helped by SportsAid when I was starting out. Receiving a SportsAid award makes you feel valued and that you can keep going forward and do better in your sport. I’ve never forgotten that.”

SportsAid is over 40 years’ old and has supported tens of thousands of athletes during the critical early stages of their careers, including Sir Mo Farah, Dame Jessica Ennis-Hill, Baroness Grey-Thompson, Dame Sarah Storey, Sir Steve Redgrave, Dame Katherine Grainger and Daley Thompson CBE among its extensive alumni. Some list!

Everyone’s support will keep me going

I hope to come back in one piece but just in case… here’s a few thank yous. My colleagues at Alizeti have been incredibly supportive: I have promised not to bore them about it all on my return – and my family and friends have been curious and understanding in equal measure.

I would like to finish by saying a massive thank you to everyone who has been donating to my Just Giving page – my details are below. It’s a wonderful reminder of the generous and supportive nature of everyone across British racing.

Best of luck Susannah! You can help her to support SportsAid here: https://www.justgiving.com/fundraising/susannah-gill-777