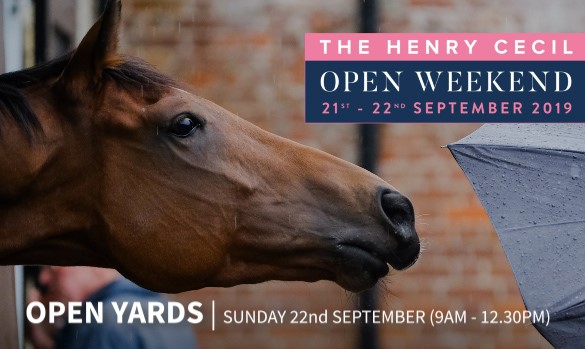 The Henry Cecil Open Weekend: A look at what’s on

The Henry Cecil Open Weekend will take place this weekend (21st and 22nd September), giving visitors the rare chance to see behind the scenes at British horseracing’s HQ and an opportunity to meet see stars Logician, Enable and Stradivarius on the famous Warren Hill gallops.

This year’s Open weekend has been renamed to celebrate the life of the late, great Sir Henry Cecil. The three-year partnership, backed by a group of his previous owners, is committed to supporting the development and welfare of young people working in the racing industry. Beneficiaries are Racing Welfare, The Racing Centre and British Racing School.

Prices start at £17 per person for a Sunday wristband and can be purchased during the weekend at all equine sites, car parks, and yards. Children aged 12 years of age and under go FREE all weekend.

Charlie Fellowes, Chairman of The Henry Cecil Open Weekend said: “The Open Weekend is a fantastic opportunity for the public to go behind the scenes and meet the trainers, staff, and horses that have made this a summer of racing to remember.

“We have an action-packed weekend planned for our visitors to enjoy. The queen of racing Enable will canter on Warren Hill, alongside a host of other big names on Sunday morning. After events finish on the Heath, myself and 20 other Newmarket trainers will open our gates to the public between 9am-12:30pm, a highlight of the weekend.”

Please visit www.thehenrycecilopenweekend.co.uk for our full ticket pricings, a schedule of events, and more information.