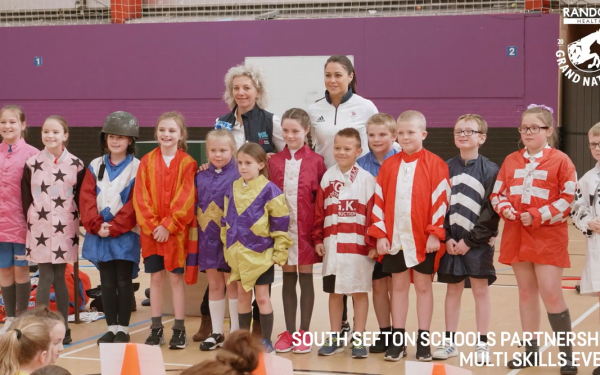 The run-up to Aintree is always a special time for Racing to School’s Carrie Ford. Her unforgettable fifth place in the Grand National on beloved Forest Gunner sets the scene for her recent work in sharing the magic of the race and sport to young people in Merseyside.

I can’t quite believe I made history in 2005 when I finished fifth on board Forest Gunner in the Grand National. It was the highest-placed finish by a female jockey at the time, which is a record I am pleased was taken away from me as our female riders have got better opportunities.

As an amateur jockey I had around 900 rides during my career and turned professional just for the National. The reality at the time is that I couldn’t have made a living as a professional jockey. It just wouldn’t have been feasible. I had already come out of retirement once, to win the Foxhunters’ Chase the previous year on Gunner, just 10 weeks after giving birth to my daughter, Hannah!

You don’t need me to tell you but there really is other race like it. It was a surreal and amazing experience. I never rode at the Cheltenham Festival so had nothing to really compare the experience with, but walking the Aintree course on the morning of the race, the atmosphere was incredible and unique. Everyone was very quiet, wishing each other luck; it just isn’t like any other race day.

In my role for Racing to School and as an Aintree Racecourse Ambassador, I was delighted to be a part of the 2019 Randox Health Grand National Trophy Tour earlier this week.

This was organised by Jessica Dalgliesh (Regional Senior Communications Executive, The Jockey Club, North West) and was part of the official unveiling of this years’ Randox Health Grand National Trophy.

Some lucky young people were treated to a sneak (and top secret!) preview as the tour involved visits to Maricourt High School, which is part of the Aintree Beacon project, and Kings Leadership Academy. Star of the show was my fellow Aintree Racecourse ambassador and Olympic Gold Medallist, Sam Quek, MBE who talked to Y7 students from both schools during their respective school assemblies.

I shared my experiences of riding around the Grand National course; from the thrills and excitement winning the ‘amateurs Grand National’, known as the Foxhunter’s 2004, to the hurly burly of the Grand National itself the following year. Sam inspired pupils as she talked about her journey in sport, from competing firstly in a boys’ football team, to becoming an Olympic Gold Medallist as part of the victorious Women’s hockey team in Rio 2016.

Then to the moment we’d all been waiting for… race sponsor Randox Health’s Marc Coppez unveiled the new trophy and explained the background to its design. In connection with Randox Health, the trophy is designed to include detail to represent protein, antibodies and bio chips, which are fundamental to their work in providing ‘full body health MOTs’.

Kings Leadership Academy also hosted a Grand National-themed multi-skills event, which involved 10 local Primary schools. These younger children also got to hear of mine and Sam’s sporting achievements, and of course got to see the Randox Health Grand National trophy, too.

Final stop of the tour was a visit to the Oncology ward at Alder Hey hospital, where we all got to meet and chat to the amazingly brave children and their parents. We were blown away by this experience and hope the children enjoyed our visit as much as we did.

Visit Aintree’s website to find out more about their Community Programme.