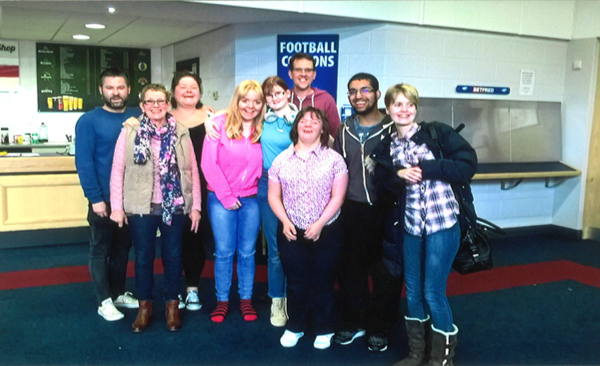 Thumbs up from Kylie for local Performing Arts Group in Pontefract

Pontefract Racecourse have been working closely with local community group, Into The Sky, who run their weekly Friday class from the racecourse. ‘Into The Sky’ is a performing arts group that supports a fantastic set of young adults with varying special needs.

Many of the same group also get together on a Wednesday in Barnsley under the banner ‘Cross the Sky’ and the groups have been working hard to produce a music video for a Kylie Minogue track. They’ve already had the thumbs up from the popstar herself!

Richard Hamill of Pontefract Racecourse said: “We felt that we could offer the new group, Into The Sky, a location which was easily accessible for the students. The group was thrilled that they would be able to incorporate some vital ‘travel training’ into the day, encouraging students to learn to travel independently, thereby enriching their lives.”

The racecourse work closely with the students each week during their sessions – from a ‘What happens in the Parade Ring’ roleplay workshop, to running races on the course. Arts and crafts are included and they enjoy being the audience for weekly performances and dance routines – sometimes even joining the cast. All the students are encouraged to interact with staff at the racecourse to help develop social and personal skills, even apparently simple tasks such as signing in on arrival to having a coffee and weekly catch up have great value to the group.

The racecourse has really got stuck in with supporting this group and now runs behind the scenes tours across the racecourse and arranges visits to watch live racing. They also support trips in to Pontefract or to the local Xscape complex.

One parent commented on their child’s involvement in the weekly group: “Sam lives for her music and drama. Setting up this group so close to home has been an absolute godsend – thank you.”