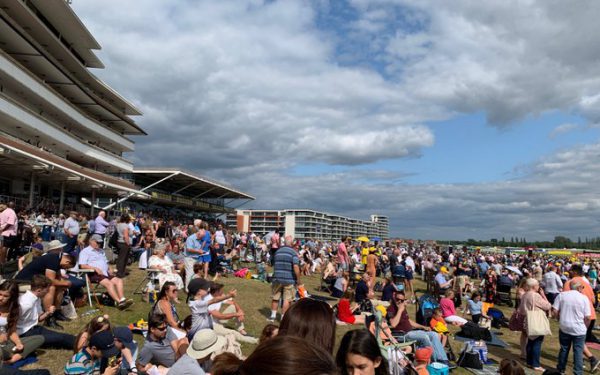 As in previous few years, the event was free to enter and aimed at giving local families a great day out.  The popular ‘Arabian Rainbow Horses’ competition, which sees local Primary School pupils decorate a life-size horse statue offered the winning school a prize of £2,500. Congratulations this year go to Hungerford Primary School.

A small group from each of the participating schools was met by the Racing to School team and around 40 pupils and parents were guided around the racecourse and out on the track for some races of their own. Later in the day, Racing to School’s two jockey coaches were on hand to give demonstrations on an Equicizer, which certainly proved popular.

Newbury ensured that there was plenty of activity going on around the course with face-painting, prize draws and giveaways all adding to the carnival atmosphere. The BHA’s Careers in Racing team was also there as part of the Take the Reins initiative, giving a group young people from North London an insight into the sport and the career opportunities it can offer.

Top jump jockey Bryony Frost was also on track, riding in a number of races and taking time out in between to give lessons at the British Racing School’s Mobile Training Facility.

There was even time for the event’s generous benefactor, Shadwell Stud, to get two winners on the day in the colours of His Highness Sheikh Hamdan Al Maktoum.

The Dubai International Arabian Raceday is a unique event on the racing calendar and is well supported by the people of Berkshire. Below are some images of the day captured on social media.