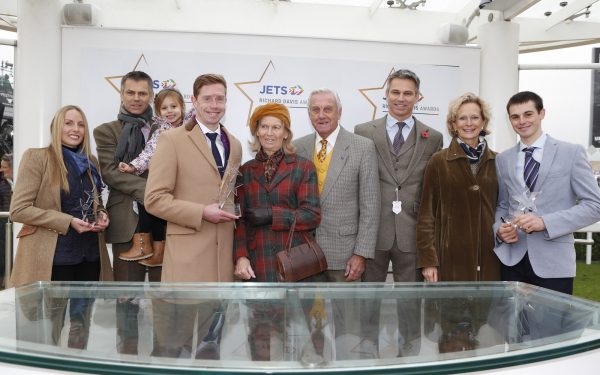 The winners of the JETS Richard Davis Awards were announced at Cheltenham Racecourse on November 17th with former jump jockey Aodhagán Conlon picking up the £3,000 prize for The Jockey Club Achievement Award. Plumbing and heating engineer Anthony Freeman and Racecourse and TV presenter Adele Mulrennan each received £500 as runners-up.

Aodhagán Conlon rode as a jump jockey for nine years and had 36 winners under rules in the UK, mainly attached to Rebecca Curtis and Tom George. Always fascinated with the psychological aspect of racing, Aodhagán originally used JETS to help fund a Psychology degree course at Bath Spa University, which he completed with first class honours. He has continued his education with a masters in Sports and Exercise Psychology and is now studying for a PhD at the University of Bath alongside Stage 2 training with the British Psychological Society. Alongside his academic work, he is working in practical settings with a range of athletes across sport including delivering workshops at BHA jockey training seminars and as a Performance Consultant for the PJA.

JETS Manager, Lisa Delany, said: “Every year we’re impressed with the quality of entries for these Awards. This year’s finalists have shown immense dedication to their chosen second careers, boosting their skill set in a range of different areas and showing complete commitment to developing themselves to their full potential.”

Speaking about his new career, Aodhagán Conlon said: “I was never able to have the level of success I wanted as a jockey but after what will be seven years of training, I feel that I’m well on my way to achieving my dream of being able to support athletes at an elite level.”

Former Flat Apprentice Eva Moscrop, owner of Cortado Espresso Bar in Newmarket, won the IJF Progress Award along with £2,000. Eva rode for five years until 2016 before injuries and lack of opportunities led to her embarking on a completely new career, opening the coffee shop on Newmarket High Street in September 2018.