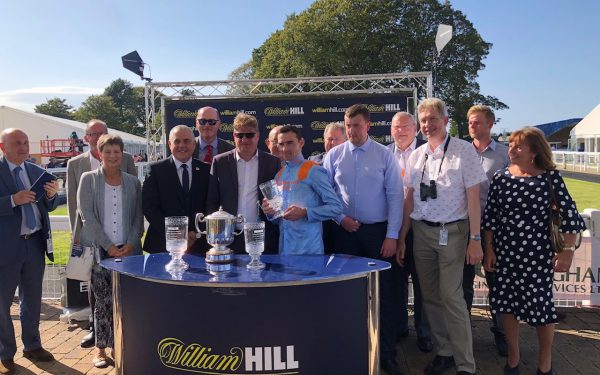 The first-of-its-kind partnership between Scottish Racing and William Hill in support of the work of Alzheimer Scotland reached new heights at the weekend, when the Uniting Against Dementia Handicap featured on the racecard during Ayr’s premier Gold Cup fixture.

Launched on 1st April and initiated by Scottish Racing, the partnership aims to support and raise awareness of those living with dementia, while generating important funds for the charity. Raceday staff across the five Scottish racecourses: Perth, Musselburgh, Hamilton Park, Ayr and Kelso and 700 members of William Hill shop staff in Scotland  have received ‘Dementia Friends’ training. This is designed to improve their understanding of the challenges facing racegoers and how to recognise signs that may indicate that racegoers are struggling, and how they can provide support.

The William Hill Foundation: Uniting Against Dementia Handicap was won in a tight finish by Waarif, trained by David O’Meara for Middleham Park Racing XLIX and ridden by Danny Tudhope.

Claire Du Preez, Corporate Partnership Manager from Alzheimer Scotland, said: “We were thrilled to be part of the day at Ayr’s premier Gold Cup fixture and want to thank everyone at Scottish Racing and William Hill for all their support on the day and across our partnership. Our new Dementia Friends from the Scottish Racing community have all committed to making the small but vital changes that will help people with dementia to feel understood and valued in our communities. This is a crucial step towards building a dementia-friendly Scotland, where nobody should face dementia alone.”

Charity Alzheimer Scotland, whose strapline includes ‘Together we can make sure no one faces dementia alone’ had information in the racecard and a rug embroidered with the partnership logos that was presented to connections of the winning horse.

A bucket collection held on the day raised £2,100 for Alzheimer Scotland.

The unique tartan rug is due to be raffled off to benefit Alzheimer Scotland – simply donate £5 and you can be in with a chance to win the rug!