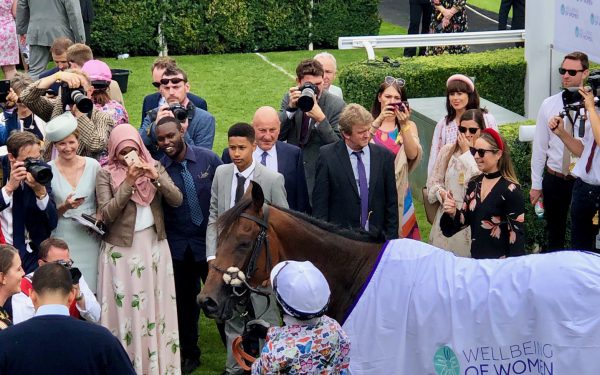 Ladies Day at the 2019 Qatar Goodwood Festival reached a crescendo before even the first race on the card was run. The parade ring was bursting with camera crews and well-wishers for the 12 lady amateur riders competing for The Magnolia Cup Sprint race. They were preparing to test all the hard work of the months leading up to the sport’s most glamorous and talked about charity race. From the designer silks to the variety of individual back stories, the usually reserved and quintessential midsummer Goodwood crowd could not help but get carried along with excitement in anticipation of witnessing something pretty special. They were not disappointed.

The Magnolia Cup has gained a reputation over the years for providing Ladies Day at the Sussex track with a unique focal point, not just for drawing together a wide range of riders but more importantly to highlight and raise valuable funds for important causes. Wellbeing of Women’s research work for women and babies was the motivation for the dozen riders who, if not already fighting fraying nerves, could be forgiven for being completely undone when hit with the clamour of the media and cheering from their supporter groups as they left the weighing room. The Epsom Derby creates no more intimate excitement than that which was bubbling up as the jockeys made their way down the course for the flag start, to return flat out down Goodwood’s iconic home straight.

Model and TV personality Vogue Williams and Olympian and accomplished rider Victoria Pendleton had long been the main story of the race, until that is that 18-year-old Khadijah Mellah was announced in the line-up. The South London youngster had not even sat on a racehorse before the spring, learning her riding skills outside her school work and alongside friends at the Ebony Horse Club in Brixton. Many made the trip to the course to cheer her on and to watch her and mount Haverland take their chance – one rated by bookmakers to be no better than 25-1. In a fast-run race, Mellah held a good position near the stands’ rails and stylishly pushed through the Charlie Fellowes-trained horse to claim a narrow win.

The fact that the winner was the first to wear a hijab while competing at a British racecourse was quickly highlighted, but the achievement of this young woman and the 11 riders who followed her home – BBC journalist Alexis Green and Rachael Gowland who works in racing for the EBF being her closest pursuers – stands for more than novelty but as clear recognition of what the sport gives to  those who are offer sacrifice and commitment to compete.