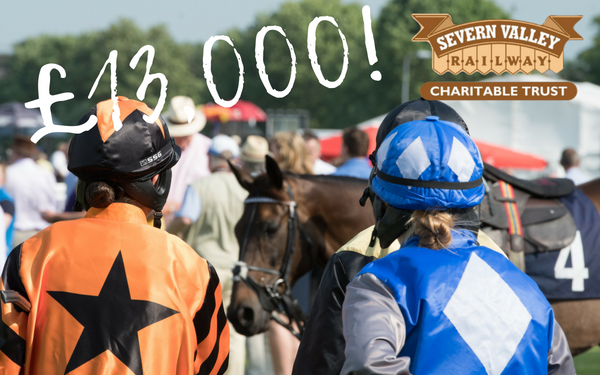 Worcester Racecourse celebrated its four-year collaboration with the Severn Valley Railway Charitable Raceday on June 11th by helping to raise £13,000 for the heritage steam railway that runs through Worcestershire and Shropshire.

The charity hired the Parade Ring Marquee and hosted the local business community for a three-course lunch, followed by an auction. The charity’s bucket collection efforts were supported by a racecourse donation of £3 for every Centre Course Enclosure ticket sold.

Shelagh Paterson, Director of Development at Severn Valley Railway Charitable Trust said of the day: “I would just like to say a huge thank you to all at the racecourse for making our fourth day at Worcester another success.”

Jenny Cheshire, Executive Director of Worcester Racecourse added: “We are delighted to have contributed towards the incredible sum of £13,000 raised at the Severn Valley Railway Raceday. The steam railway is such an important part of the local Worcestershire community and we are thrilled to be part of securing the future of the railway. Thank you to our sponsors and racegoers for giving so generously and making this day such a success. We are already looking forward to next year’s event where we hope to raise even more for this wonderful charity.”