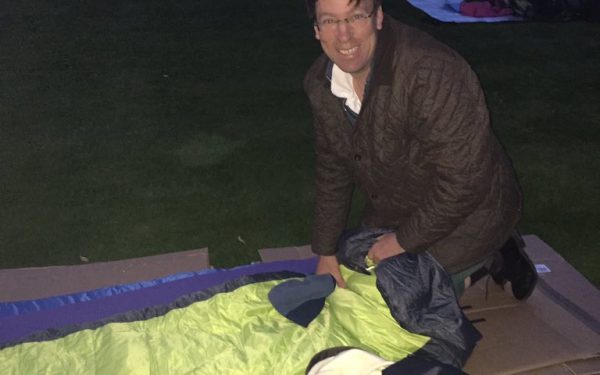 York’s Chief Executive William Derby enjoyed an April night under the stars in support of a nationwide initiative to support homeless charities. The racecourse hosted the event, which raised over £30,000 – just one of the activities that they will get behind this year.

I was really pleased to be involved in the CEO Sleepout campaign despite the chilly weather. I was just one of 50 business leaders who rolled out blankets that night – but I was glad it was a choice I made and was only a one-off. What I experienced was nothing compared with those faced with no alternative but to endure endless nights of homelessness. It is vital that this kind of poverty is supported and we at York were pleased to do our bit to contribute to an amazing total of £1.4m already donated for relevant charities through this great idea.

We made sure the pre-parade ring at York had plenty of cardboard and hot drinks but this was no stunt but a serious attempt to better understand the issues that people face every day of their lives. Homelessness is a problem in every town and city in the country and I so pleased to be involved.

Our group listened to individuals who have lived on the streets without a home and from charities offering support and assistance. Anyone wishing to get involved about this nationwide can find at: www.ceosleepoutuk.com

We do our very best at York to run an active and extensive charitable and community programme, including participating in the sport’s volunteering days. At the end of last season we rallied a team to get stuck in to clearing up Chapman’s Pond – a local nature area – and this activity is always rewarding fun.

The work of Racing Welfare is a priority for us, so too staging Macmillan Charity Raceday in June, which last year raised a record £512,000 for Macmillan, and other cancer and racing charities. We are so proud that it is Macmillan’s biggest single fundraising event.

It promises to be another busy year at York both on and off the racecourse.