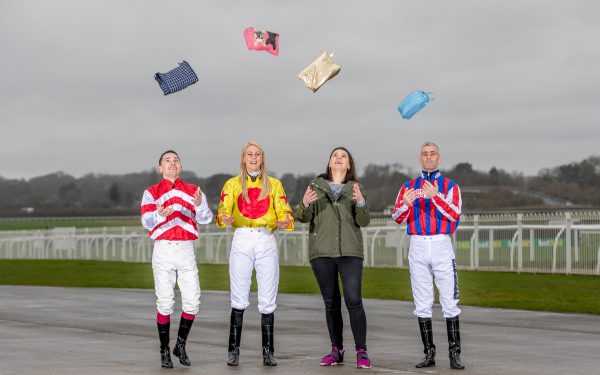 A group of Yorkshire jockeys has come together to help those less fortunate than themselves by working with the Harrogate Homeless Project.

Often travelling to race meetings with only the contents of a washbag, most jockeys’ equipment is transported between racecourses via the valets who work in the weighing room. To lend their support to this great cause, the jockeys have filled spare washbags with useful contents to help local people who find themselves in difficult circumstances.

The idea is the brainchild of Go Racing in Yorkshire raceday presenter Adele Mulrennan, whose husband Paul is a leading Yorkshire jockey. Adele said:

“I have seen people sleeping rough in Harrogate and wanted to do something to help. I spoke to the team at the Harrogate Homeless Project who suggested some useful products and Paul gave me one of his washbags to put them in. He thought that some of the other lads in the weighing room would get involved too and the idea has spiralled!

“The support from the jockeys has been great, but the biggest challenge has been collecting the completed bags, particularly as racing was cancelled for a few days due to the equine influenza outbreak. Fortunately, once it resumed we were able to pick up the momentum again.”

A number of Yorkshire racecourses have also got involved making up their own washbags and donating items and clothing.

“When we heard what the jockeys were doing we were keen to support them. This is a great initiative and a good way to help the local community.”

Liz Hancock, Chief Executive of Harrogate Homeless Project Ltd was delighted at the support from the racing industry,

“We are grateful for all donations received and this cause has really resonated among the jockeys,” said Liz. “The donations that have come from the racing community will be very beneficial and help us to continue our work.”

The Harrogate Homeless project is a team of committed individuals, who make sure that homeless people have the strategies, support and services that are needed to begin the difficult journey back to truly independent living. They run a homeless hostel which houses 16 people and also provide an emergency refuge for rough sleepers. A day service called Springboard in Harrogate town centre is also available. This provides food, shower facilities, activities and one-on-one meetings with support workers that are designed to help homeless or formerly homeless people get the help and advice that they need.

According to a report released by homeless charity Shelter in November, over 320,000 people in Britain are now homeless, with the number expected to rise.